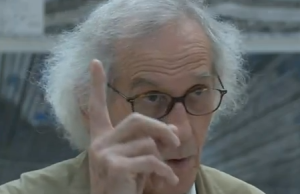 “It’s almost like a poker game,” quips Christo in the new video by TateShots, in which the artist expounds for three minutes on the difficulties he and his late partner Jeanne-Claude have faced since the 1960’s when they began proposing art projects in which they would wrap buildings, walkways, trees and monuments in millions of square feet of fabric—or their “gentle disturbances” as he calls them. “Fifty years, 22 projects and we’ve failed to get permission for 37.”

He gives the example of their proposal to wrap the Reichstag in Berlin, which was rejected three times before finally winning approval by parliamentary vote. The Reichstag was wrapped in June 1995 and remained so for 14 days.

But even better than hearing Christo discuss the meaning of his work—”absolutely, totally irrational”—is watching the genteel Frenchman describing the art world.

“The art world, the museum world, it’s an extremely small community,” he says and then throws up two air quotes. “A terribly private club.”