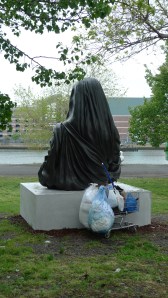 Yesterday, in the Frieze New York sculpture garden, a shopping cart was parked behind a giant statue of a mustachioed Mona Lisa by Sudobh Gupta. The cart looked a little out of place in the well manicured landscape, especially because  it was filled with plastic and paper bags, some filled with blankets. There was a broom handle and an umbrella in there too, and a plastic bottle of grape juice sat on Mr. Gupta’s pedestal.

The rumor going around the fair was that the cart was placed there by the Swiss artist Christoph Büchel, who was announced as a participant in the sculpture garden by its curator, Tom Eccles, but whose name was conspicuously absent from the map of the place. The story went that Mr. Büchel had purchased a number of shopping carts from homeless people in New York City and installed them on the sculpture grounds.

It certainly seemed possible. Mr. Büchel is known for interventions—often uncredited—that vary from being rather sweet (he turned one of Hauser & Wirth’s London galleries into a fully functioning community center) to sort of obnoxiously funny (he installed a sex club at the Vienna Secession museum in a room with a Klimt frieze once deemed pornographic) to fairly annoying and messy—let us not forget his wildly ambitious installation project at Mass MoCA, in North Adams, Mass., which ran overbudget and past deadline, was opened to the public by the museum while the show was incomplete (without the artist’s permission) and resulted in a lawsuit over artists’ rights that stretched on for years.

A request for comment from Frieze and the gallery more or less confirmed the rumor, and included a few more details and clarifications. According to a press rep associated with Hauser & Wirth, galleries employees paid between $350 to $500 for each of the six carts that are installed on the grounds of Frieze. The project is called “1%” and each cart is named after its former owner: 1% (Albert), 1% (John), 1% (Joe) and so forth.

According to the representative, the title of the piece refers not only to Occupy rhetoric, but also the percentage of the U.S. population that will be homeless at some point in a given year, about 3.5 million people.

This being an art fair, the carts are for sale, ranging in price from $35,000 to $50,000—one percent of what each homeless person was paid for the cart. If the works sell, the artist and Hauser & Wirth will receive the money, and the artist will put his cut toward realizing a homeless parade—a parade of homeless people—in New York. He’s said to be organizing it in collaboration with homeless organizations and a New York art institution.

Assuming you believe the artist’s story—that he actually bought these works from homeless people and didn’t construct them himself—it’s a fairly detestable work. Sure, their former owners made a fair-market deal (some reportedly declined the offer to sell their belongings) and walked away with some cash they didn’t have before, and yes, they couldn’t sell their own belongings for $50,000—or gain access to a forum like Frieze in which they might be able to do that. But still, detestable.

That said, the work is really not a bad object lesson in the way art and money collide at an art fair. Tens of millions of dollars of art will sell during the five-day run of Frieze New York. Some of that money will eventually make its way into various charities, but most of it won’t. It probably could have been spent in more socially productive and meaningful ways.

I’d prefer that Mr. Büchel take his cut of sales of this particularly stark example of an art-fair transaction and donate it to a homeless charity rather than stage a parade (though it could very well start a conversation about the increase in homelessness in the city in recent years, so we’ll ultimately have to wait for the end result). But that’s not the way that art and its markets function today. As has been said before, we get the art we deserve. Will collectors now step up to buy it?

Update, May 5: The section about the artist’s planned Mass MoCA show was updated to reflect the development of the project and the legal rulings that emerged from the resulting legal case.