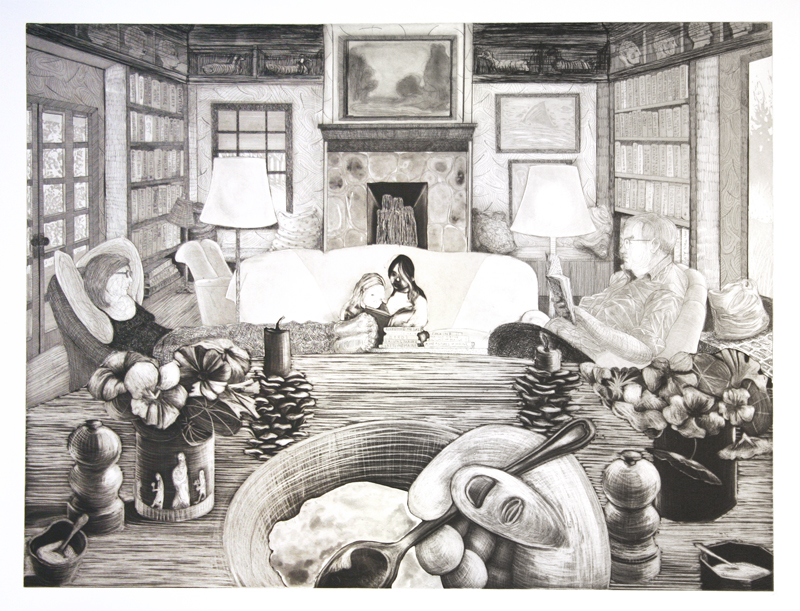 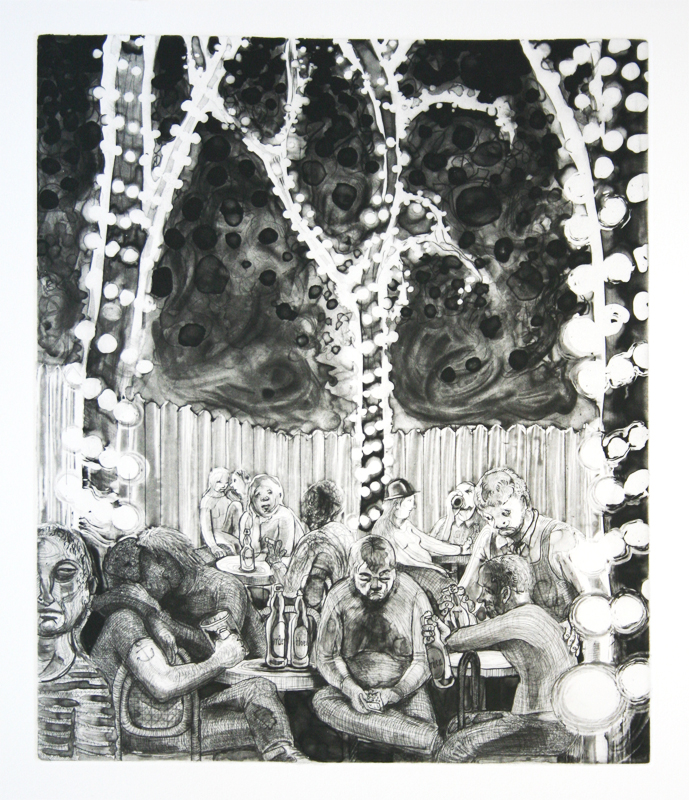 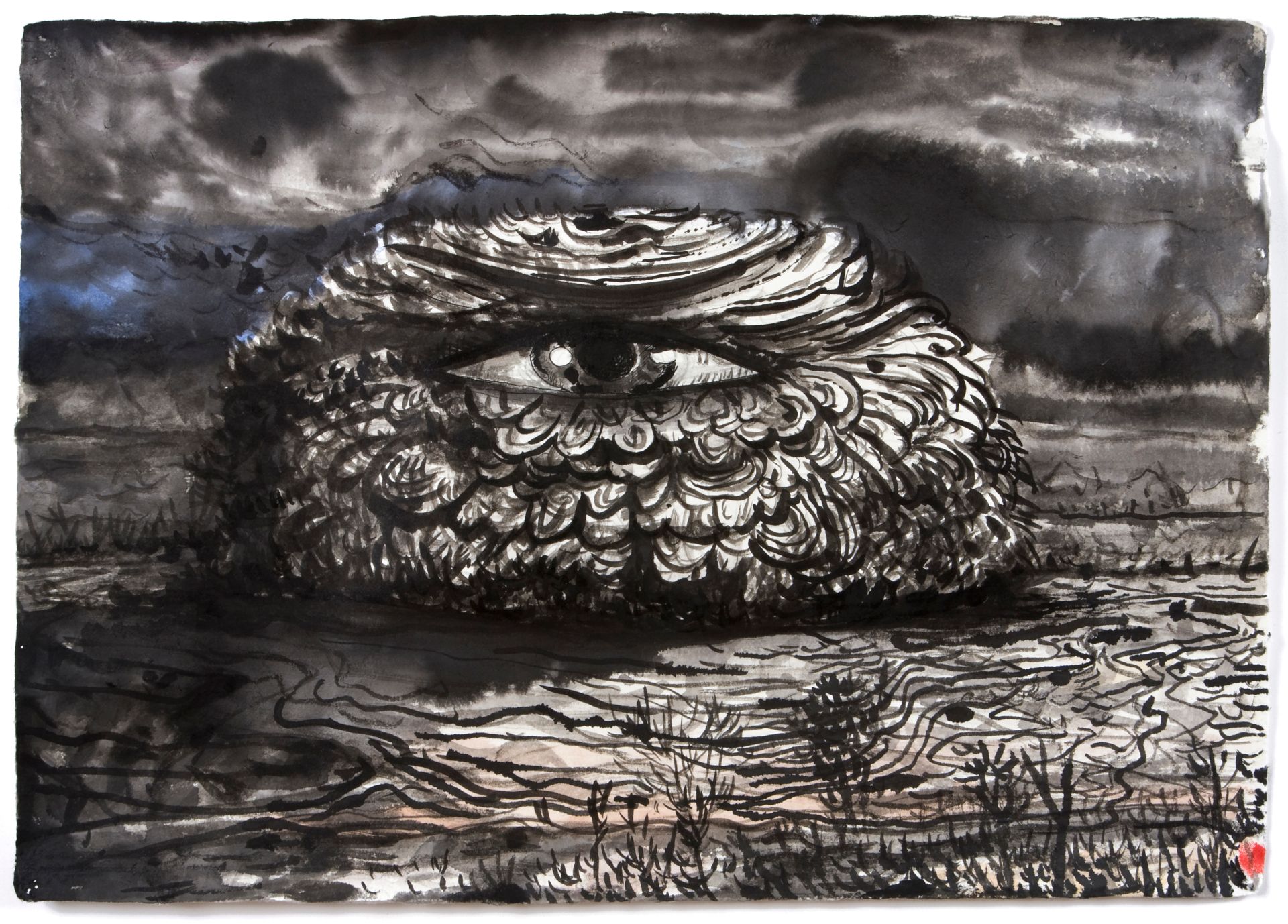 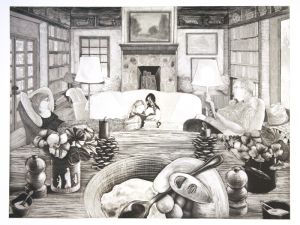 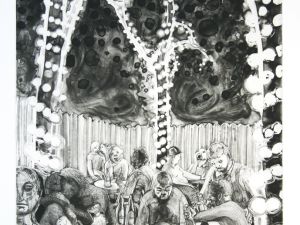 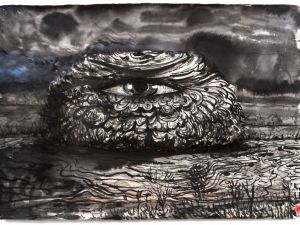 NICOLE EISENMAN’S IS A RELENTLESS and relentlessly troubled intelligence crammed full of fairy tales and psychoanalysis. She disguises political demands as dirty jokes, and vice versa, and uses punk-Jungian imagery, casually masterful drawing, a host of art-historical references and a catholic array of techniques that range from the cartoonishly graphic to the manically antirepresentational, all with the same steady, pragmatic dispassion to engage with her singular, besetting question. For Ms. Eisenman, the problem is not constructing images but pushing them back, or cutting them away, to reveal, bit by bit, what’s shining through them. So her recent, explosive run through the cuts, scrapes, burns and compressions of printmaking—the results of which include the series of monotypes in this year’s Whitney Biennial, and her current show at Leo Koenig—must have been a long time coming.

The front room of the gallery is dominated by the raucous color of 40 monotypes, hung in two long rows, that continue along the lines laid out by the set featured in the Biennial. They’re all the same size—about one-and-a-half feet by two—use the same type of frame and are predominantly of the same composition: a close-up view of a face. This consistency of terms allows the prints to operate with the simultaneous teamwork and autonomy of Tarot or baseball cards.

The self-absorption of the bathroom mirror soliloquy becomes a genuine, if idiosyncratic, lens on the larger world—a world that includes, along with those bathroom grimaces, two face-on origines du monde, one an exuberant, bloody masturbation sunrise, the other a nocturnal postpartum self-exposure with collaged, fur-covered mannequin hands; a kind of Twelve of Bayonets, in which a naked-bottomed figure stands on her head surrounded by 12 rising knives, next to a Seventeen of Cigars, in which similarly significant collage elements are shoved into the ears, mouth and throat of a football-brown male head, as well as under his lizard-green eyes; a red female Eden, in which two heavy women in delicately white etched lines stand behind a white garden made from actual pressed flowers; a cowboy riding a world-bestriding gorilla; a rectangular owl dripping gold; a simple pilgrim in bluejeans piercing his own left foot with a staff; a DayGlo rerun of van Gogh’s Portrait of Joseph Roulin; three William Steig-style investigations of object relations; an orange Red Army officer; a collage of cyclists whizzing past monuments of mid-century sculpture; a naked female shaman playing Operation on a Crimean War casualty; a fluorescent lightbulb, glowing and turd-shaped, shining on a Bavarian child figurine carrying a bundle of parsnips; a self portrait of the artist as printmaker; and a portrait of David Byrne.

Next to this riot of phantasmic color, the etchings and lithographs, published by Harlan & Weaver in Manhattan and Jungle Press Editions in Brooklyn, take on a kind of postmortem scientific precision. Technical experimentation and emotional expression exploit each other with the same fervor as in the monotypes, but in black and white (or even black and blue, black and gray, or, in one case, half a dozen watery yellows and greens and browns), the balance is shifted.

In Sloppy Bar Room Kiss, a two-color litho, two melding faces, resting on a table next to two glasses and a bottle of plonk, serve as the occasion for unbroken blocks of black, fine, scratchy white lines and the smoky textures of watercolor. In Tea Party, a plutocrat with his ear tacked shut, a phony Boston patriot and a cartoon skeleton stand together in a rising blue tide, grasping a scythe topped with a pineapple and flying the American flag, unaware that the important action is behind them, in the texture of marbled black on pale inky blue with bubbles like ocean foam. Watermark uses an intricate complexity of layers and techniques to make a cozy, eerie family scene, and The Met and The Drummer both make white paper glow, like happiness in misery, by the careful use of black.

What is the singular, besetting question? This is the only way to ask it. And what is the answer that shines through it? In The Met, it takes the form of globular lights climbing trees in an opera buffa beer garden; in The Drummer, which shows a celestial everyman in a bowler hat surrounded by rising white bubbles equally reminiscent of the Milky Way and Decasia, it is the white oval face of his drum, cut out of his middle and the picture’s by cutting around it.

ANOTHER WAY TO CUT INTO a singular, besetting question is to stick to a singular motif, looking for the answer not in the carefully contextualized emptiness of white, but rather in the infinitely dense obscurity of overlapping layers of black. Bill Adams has been drawing the same one-eyed cat for years. Consisting almost entirely of wiry, tangled lines, this cat can grow to fill a frame or be shaped into a kind of topiary, swim in wild colors or float on paper alone, but, like Ms. Eisenman’s self portraits, it prefers to face the viewer head-on. Finalist, the second show at Kerry Schuss’s new space on Orchard Street, enacts this obsessively meditative tete-a-tete in a handful of intent ink drawings and gorgeously moody small watercolors, as well as in eight chine-collé etchings published, under the same title, on yellow rice paper laid into heavy white, by Flying Horse Press in Orlando. Here and there, a cat can still be recognized, but in most of the pictures the focus has moved so close that there’s nothing but an eye—human, not feline; perhaps it’s the artist’s reflected in the cat’s—surrounded by looping, feathery lines, a sexual, mystical, sideways mandorla whose reflective black pupil silently beckons and threatens. The next step will be to dive in.