On the first warm Friday in May, The Observer was sitting in a secret backroom of Tavern on Jane with comedian Dave Hill, who had promised to show us the best toilet experience of all time.

“It will change your life,” said the first-time author, whose collection of essays, Tasteful Nudes, came out last week from St. Martins’ Press. Outside of his regular contributions to “This American Life,” the soft-spoken Mr. Hill is probably best known around the indie comedy circuit for his combination of cerebral humor, aw-shucks demeanor and a faux-metal bravado. During a recent book release party for Tasteful Nudes at The Bell House in Brooklyn, Mr. Hill sang with his band Valley Lodge, got into a wrestling/kissing match with a wine-drunk John Hodgman, dodged a moonwalking Michael Jackson-impersonating dwarf and fielded questions that voice actor H. Jon Benjamin had lifted from the pages of the booty magazine Straight Stuntin’. (“What’re your measurements?”)

These men—and women, Janeane Garofalo did a short set—are Mr. Hill’s contemporaries and, like theirs, his jokes are less about punchlines and more about stories.

Like the time he had a two liter bottle of urine thrown on him by a homeless man hiding behind a trash receptacle on a subway platform.

“Think about how much urine that would take,” Mr. Hill told the packed house on Tuesday. “People don’t really pee all that much at one time. And consider that homeless people are generally dehydrated … that was probably months’ worth of accumulated pee.”

Not that there isn’t a punchline to his storytelling, and the tale of the thrown urine bottle eventually wound its way to one: “That guy wet my pants,” Mr. Hill deadpanned.

Call it potty-humor light: David Sedaris, minus the cynicism, but plus an obsession with bodily functions. This type of monologing is likely why the Cleveland native has found success in radio, both on NPR and on his own podcast, “The Dave Hill Explosion.” It is also what makes Tasteful Nudes such an engaging read.

But back to Tavern on Jane, and the promised best toilet experience of all time. Mr. Hill had in mind what he called a “magic bathroom” in the Japanese restaurant Takashi on Hudson Street. He extols on the virtues of Japanese combination bidet/commodes in his new book, in the chapter where his band tours Japan and he ends up spending hours on the one in his hotel room. “After forty-five minutes of this, I was drenched in sweat and slowly fading in and out of consciousness,” he writes. “After about two hours of this, I felt as if I were floating over my own body as I looked down on it. I’m also pretty sure I saw that bright light that people who’ve had near-death experiences always talk about.”

And apparently, this magical fountain for the posterior was mere moments away, just down the block, really. We agreed to go, and let it be said, without getting too graphic, that the Super Toilet (that’s the actual name for this type of high-tech machine, the most advanced version being the Washlet G, which comes with its own blow dryer, heated seat and oscillating water pressure for front and back) was wonderfully refreshing, as was the sake we had moved on to. And Mr. Hill began to open up about his life, and his book.

“I didn’t want it to be in order, because it’s not a memoir,” Mr. Hill said in his trademark faux-SoCal drawl. He doesn’t pepper the ends of his sentences with “Right?” or “You Know?” but one always has the feeling that a rhetorical question mark is waiting in the wings of his speech. “I wanted it to leap-frog around.”

Absent in the book are descriptions of his years doing comedy. He didn’t, he said, want to write about any “showbizzy stuff.”

“I never thought about being a comedian, really. I maybe thought it would be cool in some abstract way, but I guess I just like acting like an idiot.”

Before he started writing for television shows and doing stand-up full-time, he made his living as a journalist, but found that he always wanted to slip in a few jokes. “The piece would be 750 words, but I’d only care about those two sentences, if they’d make it in.”

But journalism is only one of the pre-comedy pursuits he writes about in Nudes. The 38-year-old has had a dazzling variety of jobs. He was a pedicab driver for two days, though he imagined at the time it would be a much longer stint. “My hair would be salt-and-pepper gray and the lines in my face would tell a story, the story of a guy who is so awesome at driving a pedicab it’s not even funny,” he writes. He was also a rock star several times over: in 1995 his band The Sons of Elvis enjoyed brief success, getting their videos on MTV and opening for Slash; he played guitar for heavy-metal band Diamondsnake, along with Walter Schreifels and Moby; another of his bands, Valley Lodge, became, unironically, huge in Japan. Mr. Hill was a program aide at a homeless shelter, where he spent his postcollege days changing men’s diapers and, on one occasion, accidentally letting a crackhead run away with 300 pounds of meat. He’s written for The New York Times and Salon, for HBO and Sundance, and had a short run as a TV star on Mojo’s King of Miami.

There’s more: he has posed as a cop and investigated a break-in. He’s done stand-up for lifers at Sing Sing—and they loved him. He lived in the Chelsea Hotel, back when it was still owned by the Bard family. He once reached out to “The Hottest Naked Chick on the Internet” (objectively, of course) and got her to meet him for coffee, (She turned out to be an escort; they’ve remained friends.) He counts among his other acquaintances Dick Cavett and Malcolm Gladwell, who both appear in the web trailer for his book. Really there is only one question for Dave Hill: Is there anything he can’t do?

“I guess I’m not playing hockey anymore,” he said, sounding a bit melancholic. A die-hard fan of the sport in his youth—he is one quarter Canadian—his enthusiasm for it has dimmed. These days, he gets his exercise running—just don’t look him in the eye if you pass him on the street, please.

Tasteful Nudes is by no means all quirk and no depth. With the same wit and dry humor he uses to describe being peer-pressured by old ladies to take it all off on a clothing-optional cruise, Mr. Hill spends a chapter meditating on a period of depression that lasted several years and required him to move back in with his parents. Early in the book, he writes of his difficulties staying in shape, but it is only in the final chapter that we learn that the efforts at exercise were his way of coping with his mother’s death. Exposed and cultivated, Tasteful Nudes is everything its title promises. And it’s also pretty funny. 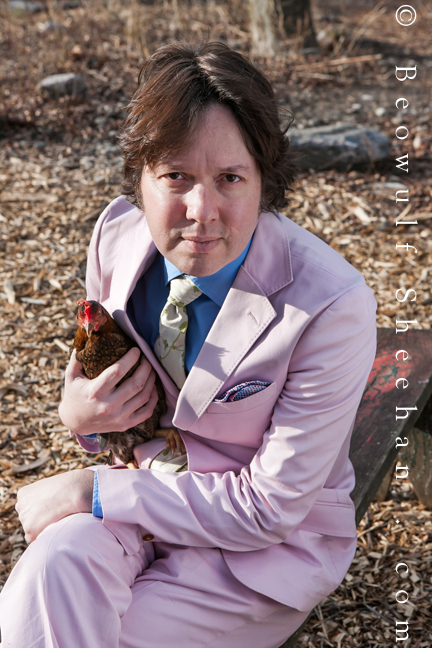