Patrica Krentcil, not in blackface (CBS)

You know, they say you can’t judge a book by its cover, but in this case we’re pretty sure that the charred shell speaks for itself. Patricia Krentcil of New Jersey stands accused of putting her 6-year-old daughter, Anna, into a tanning bed after teachers at her school discovered burn marks on the child’s body. Ms. Krentcil, who faces charges of child endangerment, says that the burns come from her daughter playing around in natural sunlight, something which the 44-year-old obviously know a lot about.

“The whole thing’s preposterous!” Ms. Krentcil told CBS. “Yes, she does go tanning with mommy but not in the booth!”  The mom also cited that the booths aren’t big enough to fit two people. However, one little girl and her mummy? They might be able to squeeze it. 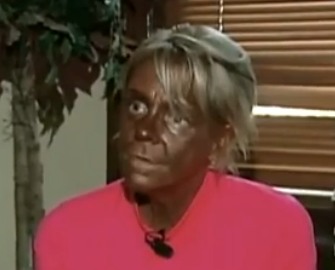