Recently, a Democratic club in Washington Heights held a meeting to endorse candidates in the local Congressional race. Afterwards, a group of reporters and some campaign staffers went out for beers at a nearby diner, Tu Sabor Latino. Once inside, they ran into a table full of volunteers working on the other major political campaign in the neighborhood—the race for a president of the Dominican Republic, between Danilo Medina and Hipólito Mejía, better known as Papá to his supporters.

Outside the diner, sirens flashed as the police escorted a motorcade carrying one of the Dominican presidential candidates up Broadway. It was a physical manifestation of a phenomenon that has long been familiar to Uptown politicos, in the upper reaches of Manhattan, local politicians can’t avoid bumping into the Dominican campaigns. (There is even a seat in the Dominican congress for a representative
from the U.S., such is the size of the ex-pat community.).

Every four years, the Dominican elections play out on the streets of Washington Heights and Inwood—with colorful signs, flags, trucks with speakers blasting Spanish songs and campaign slogans and personal appearances by the candidates. According to a 2005 study by CUNY’s Center for Latin American, Caribbean & Latino Studies, Dominicans make up over 53 percent of the population in the area, and many of the residents are dual citizens who also vote in their home country.

It turns out, this unique political landscape is riddled with potential landmines for local politicians.

“As much as politicians are constantly trying to avoid slips of the tongue on all issues, Dominican politicians are at pains to not present themselves as in favor of one party or the other when it comes to the Dominican national elections,” a staffer who has worked with several elected officials in Washington Heights and Inwood told us.

The local politicians cope with the split Dominican electorate by strenuously avoiding any declaration of allegiances. One aide for an area official refused to comment for this story telling us they didn’t want “to touch” the issue. State Senator Adriano Espaillat, who represents Washington Heights, Inwood, Riverdale and Marble Hill, used rather graphic terms when he declined to weigh in on the race to the Riverdale Times earlier this month.

“For that, you’ve gotta wear a bulletproof vest,” Mr. Espaillat told that paper. “I’m not getting involved in that.”

In an effort to keep up the appearance of impartiality, both Mr. Espaillat and the local councilman, Ydanis Rodriguez, have appeared at events for both Mr. Mejia and Mr. Medina.

As one staffer explained it, “I think it’s less a relationship of trying to pull them in for endorsements, it’s more of a symbiotic thing in terms of fundraising. I remember people throwing around figures for when Papá was in town….They were saying he was going to bring in like $1 million for his one visit to New York, for like a long weekend.”

At first, it appeared the local elected officials could relax, with the passing of the election Sunday. Mr. Medina, of the Partido de la Liberación Dominicana, appeared to emerge victorious with 51.21 percent of the vote compared to 46.96 percent for his rival, former president Mr. Mejía of the Partido Revolucionario Dominican. But Mr.Mejía initially refused to make a concession speech, and has disputed the results as “the result of manipulation and abuse of power.” So, for now, the U.S. politicians will still have to keep watching what they say, with the slim margin of victory showing just how divided the Dominican electorate is.

“If you support the wrong Dominican candidate, you’re done,” as the staffer put it. 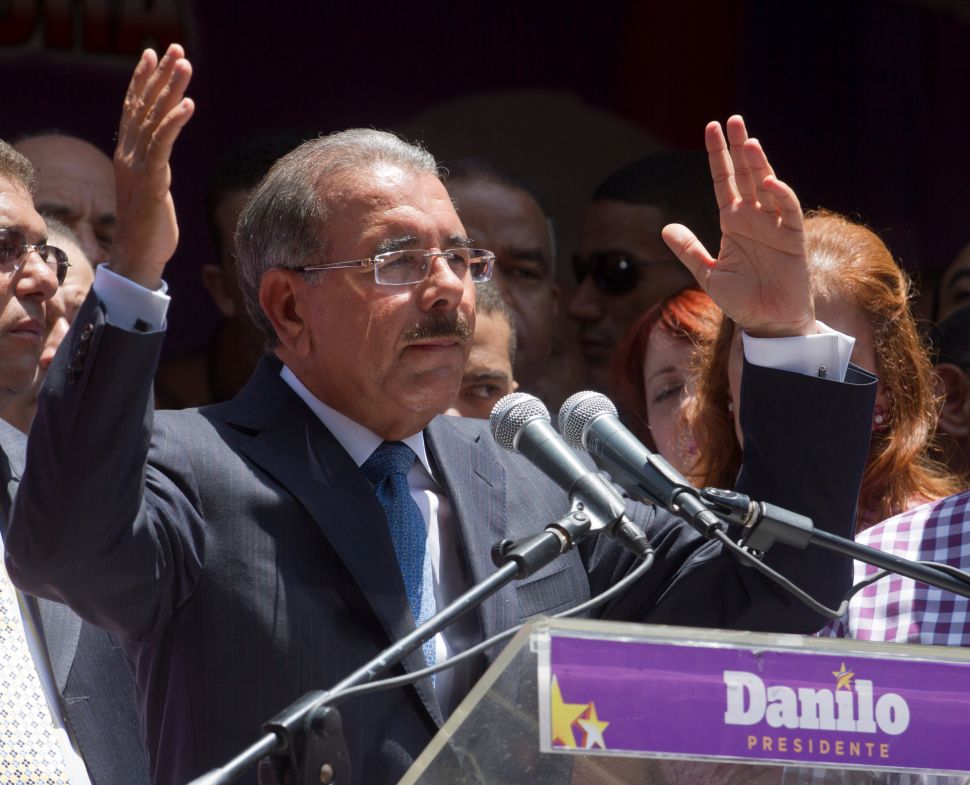