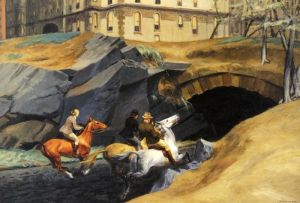 This morning, Sotheby’s American Art sale brought in $34,787,625, with 88 percent sold by lot, the highest total for an auction of American Art at Sotheby’s since May 2008.

Leading the sale was Edward Hopper’s Bridle Path, a painting of three horseback riders in Central Park, which sold for $10,386,500 after competition by four bidders. The painting, the first oil painting by Hopper to come to auction since Hotel Window sold at Sotheby’s for a record in 2006, was offered by the San Francisco Museum of Modern Art. The sale of Bridle Path is the third-highest price for a work by Hopper at auction, and the seventh-highest price reached by any work of art in a public auction of American art.

“The market for American art showed many signs of strength and confidence this week,” said Elizabeth Goldberg, head of Sotheby’s American art department, in a statement, “and we are thrilled with the results achieved today at Sotheby’s.”