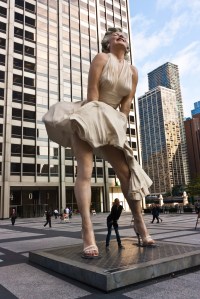 Nothing says “Palm Springs” like a 34,000-pound, 26-foot-tall statue of Marilyn Monroe posed trying to hold her dress down as the wind from a subway grate blows through it. No?

The statue of Monroe, called Forever Marilyn, was installed on Michigan Avenue in Chicago last summer and has now been moved–at the cost of about $40,000 according to the Los Angeles Times–to its new home in Palm Springs, Fla. It caused some controversy in Chicago, probably because it just looks so terrible (in our humble opinion). The public art inspired not a small amount of very classy tourists to snap photos doing things like licking the statue’s ankles and standing beneath its legs, gazing up. Sigh.

August is the 50th anniversary of the actress’s passing. The L.A. Times has a kind of terrifying video of the sculpture all disembodied while it’s in the process of being assembled.