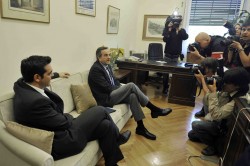 Alexis Tsipras, leader of the Coalition of the Radical Left party, SYRIZA, (L) meets with Antonis Samaras (C), leader of the Conservative ‘New Democracy’, before their meeting at the Greek Parliament in Athens on May 9, 2012. Greece remains in a deadlock over forming a new coalition to lead the country and push ahead on severe austerity cuts that were agreed in exchange for international loans. Germany has warned Athens that it must stick to its commitments if it wants to stay in the eurozone AFP PHOTO/LOUISA GOULIAMAKI (Photo credit should read LOUISA GOULIAMAKI/AFP/GettyImages)