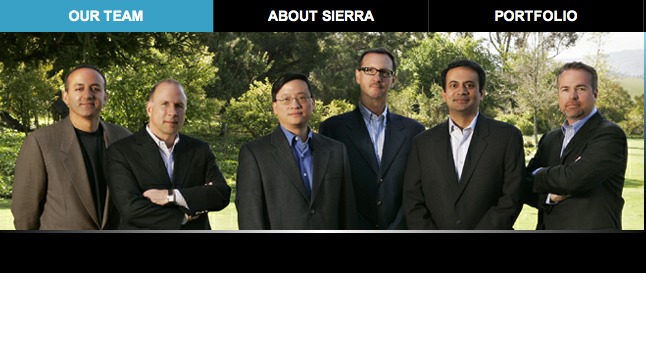 AUM: $1.425 billion
FEM: 0
Female partners: 0
Total partners: 9
Such an outdoorsy name. It's like Boy Scouts all over again. 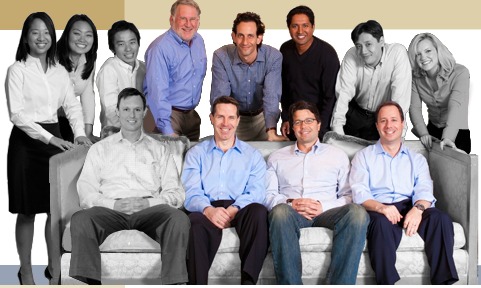 AUM: $1.1 billion
FEM: 0
Female partners: 0
Total partners: 6
The partners are the ones highlighted in color. Note that all the women are in black and white. 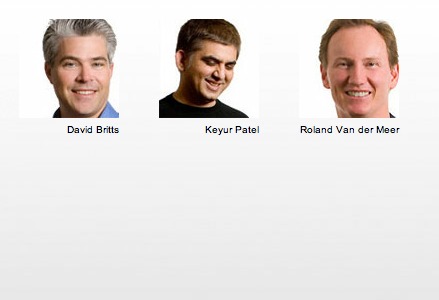 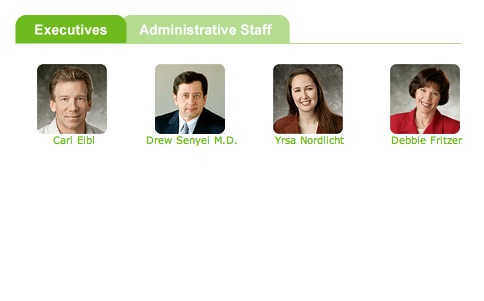 AUM: $1.1 billion
FEM: 0
Female partners: 0
Total partners: 2
Nope, neither of those (we're sure perfectly nice) ladies is a partner.
Advertisement

AUM: $2 billion
FEM: 7
Women partners: 1
Total partners: 14
Though co-founder Dixon Doll has a name that sounds like it could go either way, DCM has only one female partner, or just over 7 percent. 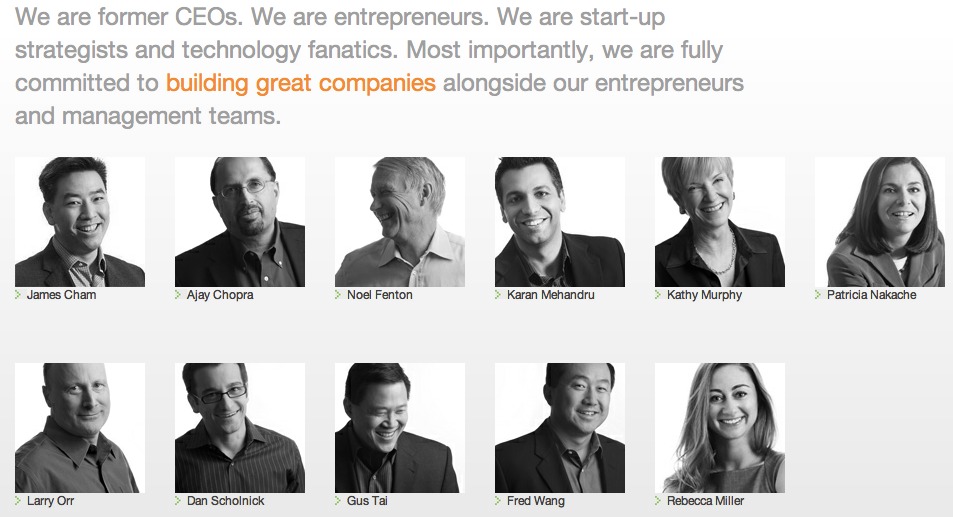 AUM: $1.236 billion
FEM: 25
Female partners: 2
Total partners: 8
This is what compiling this slideshow has done to our heads: We looked at those numbers and thought, "Huh, that's pretty good." 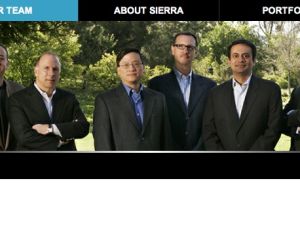 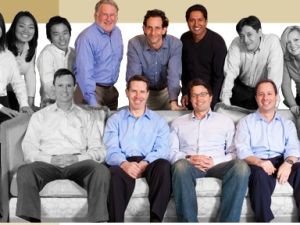 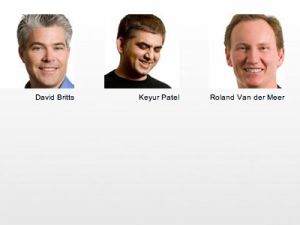 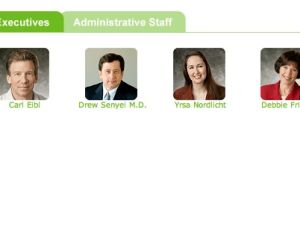 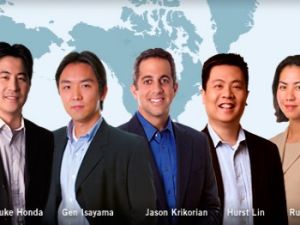 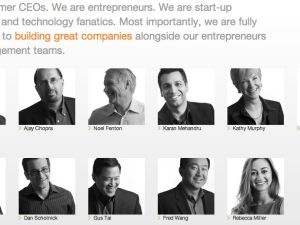 Click through the slideshow for a firm-by-firm breakdown of the numbers.

The tech industry was shocked, shocked, when news broke last week that Kleiner Perkins Caulfield & Byers had been accused of discriminating against women in a lawsuit filed by a female partner.

Kleiner Perkins, a Sand Hill Road firm that has more than $3 billion in assets under management, has 12 female partners out of 49. That’s a much higher percentage than the industry’s abysmal average, giving the firm a reputation for being progressive. “Overall, when it comes to women in the tech investing space, Kleiner Perkins has historically been perceived as one of the good guys,” wrote Colleen Taylor at TechCrunch.

And yet, the lawsuit filed by investment partner Ellen Pao alleges that, among other things: men were promoted before women; men were allowed to serve on multiple boards, while women were only allowed to serve on one board; men were paid more than women; and there was little support for women who experienced sexual harassment. Kleiner Perkins denied any wrongdoing.

The number of women in top positions is just one metric by which to judge whether a firm is a welcoming place for women to work. Still, it’s a telling one, as a Betabeat survey of the top venture capital firms revealed.

“Number of women partners” was the metric Kleiner Perkins chose to tout. According to Kleiner Perkins, women account for 12 out of 49, of the partners. That count includes “junior partners,” which is Ms. Pao’s position, according to the lawsuit.

How does that percentage stack up against the rest of the industry? Does Kleiner Perkins really have a higher-than-average number of women partners? We decided to find out.

All the data for assets under management comes from the National Venture Capital Association, which sent us their latest list from Thomson Reuters, current as of Q1 2012. The list included private equity firms that also do venture capital investing, which we attempted to identify and omit. However, some may still be included in the final list of 71 firms.*

Next, we went to each firm’s website and tallied up the number of partners and managing directors, noting how many were women. Obviously, the structure is different at different firms. For consistency, and to give firms the greatest benefit of the doubt, we counted anyone as a partner who had “partner” in his or her title, including venture partners, founding partners, administrative partners and other variations. We also included managing directors, who are senior partners. We did not include vice presidents, principals or associates. When partner titles were unlisted or ambiguous, we called and asked for the numbers.

We then calculated, for each firm on the list, the percentage of partners who are female. Rather than call it POPWAF, we decided to call this number the Female Equality Metric, or FEM. (At first we called it the Kleiner number, but decided to reserve that term for “number of discrimination lawsuits filed.”)

A firm with all male partners has a FEM of zero. A firm with all female partners (LOL, JK) would have a FEM of 100. If you think gender diversity is important, a low FEM is bad and a high FEM is good. If you think women should stay at the receptionist’s desk and out of the corner offices, a low FEM is good and a high FEM is bad. And if you think Silicon Valley is a meritocracy, as does Greg McAdoo of Sequoia Capital, which coincidentally has zero women partners, then you’ll probably dismiss these numbers as meaningless.

But page through this list of venture capital’s heavyweights, and it’s striking to see how few women have made it to the upper ranks. Also striking was the perfect 100 POFR, or percentage of female receptionists, at the 26 VC firms we called. We paged through team page after team page—the staff at a venture capital firm is almost universally called the “team”—where men’s faces lined the top rows and women’s faces appeared further down, if anywhere. “We have female administrative assistants,” explained one woman who picked up the phone, when asked whether any of the partners and managing directors were women.

Sequoia Capital arguably has the worst ratio on the list, with 32 male partners and no female partners. Kleiner Perkins does indeed have one of the best ratios in the business, with a FEM of 24 percent. No fewer than 35 firms on this list have zero female partners, giving the industry a collective FEM of 8.3 percent. As Randy Komisar of Kleiner Perkins once said, “There are not enough women in venture capital today.”

At any rate, let’s see how the nation’s top VC firms have fared on the FEM. Click here for the data>>

*Thomson’s list includes Bowman Capital Management, which reportedly has $1.7 billion under management. However the site, bowmancapital.com, was defunct at the time of writing, and all phone numbers scrounged up for the firm were either defunct or fax machines. According to the NCVA, the data is from closing of Q1 2012. If anyone knows how to contact Bowman Capital, let us know—we would love to include it on this list.