Not to compare apples to really tasteless oranges that no one has ever heard about, but while we listen to Lena Dunham condemn herself on Fresh Air this afternoon for not putting enough racial perspective in her HBO series Girls, we might want to also take a step back and remember that there is a lot worse stuff out there right now. Like a Field Guide to Chicks of the United States, the new book by a PUA (pick-up artist) named Joe Bovino (who, even amongst his own community, is considered a douchebag), which is not only blatantly sexist but more than just “casually” racist. Chicks actually seems to go out of its way in its press release to be severely offensive to every “ethnic subculture” out there. What’s an ethnic subculture, you ask?

“Shhhh…” Joe Bovino would reply. “Don’t worry your pretty little head about it.” Then he would tell you that you were being an “Afrodisiac,” which is definitely a thing.

Author Joe Bovino has identified 92 different “species” of women across the country. There’s Miss Texas, who is known for her big, blonde hair, large breasts, a natural tan and megawatt smile. She is frequently spotted in cowboy boots, short shorts and designer clothes and accessories. You’ll be able to spot her at a beauty salon, beauty pageant, country club or church. The Phillycat is a tiger on the outside and pussycat on the inside who cares mainly about family, friends and basic necessities. She’s likely spotted in a neighborhood bar, coffee shop or shopping mall. And on the West Coast, you are likely to encounter the Peace of Ass who is typically a personal trainer, psychologist or massage therapist. Her “song” is talking about inner peace, personal growth and meaningful relationships. Look for her in health food stores, yoga or Pilates studios, canyons, trails and spiritual centers. On the cover, you can see Afrodisiac, Country Biscuit and Taco Belle!

Sadly, the video walk-through for this book seems to have disappeared from the Internet already. But here’s a woman with no self-esteem talking on her web show called “Intimate Conversations” about Field Guide two times in two months, for some reason:


All women can be reduced to stereotypes that mostly deal with their race and geographical location! Female power! 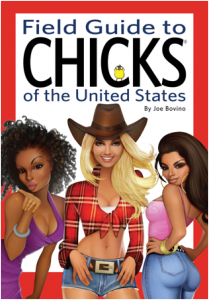