The New York City corner bodegas that dot every other corner of our fair metropolis are, as it stands, de facto sex shops. There, among the groceries, one can find beer (for courage), a wide selection of three-pack condoms (for birth control and protection from sexually transmitted diseases), sexual lubricants (for sexual lubrication), all stripes of “supplements” promising to enhance one’s sexual prowess (which suspiciously have yet to be banned by Chuck Schumer), cigarettes (post-coital smoking),feral cats (to scare unwanted sleepovers away), pornographic magazines (for people who…don’t have the internet?), and (for hydration!).

Now, in keeping with the times, they are apparently adding one more item to the cornucopia of sexually-enabling wares they already offer:

Writer and founding editor of Jezebel.com Anna Holmes Tweeted out “There are now bodegas in NYC selling ‘Fifty Shades of Grey'” with the following photographic evidence: To be fair, the top books are Fifty Shades Freed, one of the titles in the Fifty Shades series. And it’s only one bodega! That said, the bodega industry operates much like the collective consciousness, which is to say: Once an idea’s out there, they’re all on it. Like selling K-2, or whatever the latest fake synthetic drug is. Which also goes without mentioning they all use a bunch of the same suppliers.

Seeing a bodega stock a popular book isn’t uncommon: When the last few Harry Potter books came out, not a few bodegas snatched some copies and marked them up in exchange for the convenience of having them around for their neighborhood regulars. But copies of Fifty Shades, while selling well, aren’t inducing bookstore-raiding pandemonium. But it apparently has enough of a draw to appear on a bodega register. And if there’s one constant among all of New York City’s bodegas and the unique, unlikely items they sometimes sell, it’s that someone will always buy it.*

Regardless, for whatever the milestone “A Book Carried by New York City Bodegas” is worth, Fifty Shades of Grey has finally reached it. Duly noted.

[*Exception: The cat. Nobody ever pays for boedga cats. If you’ve ever paid for a bodega cat, you have been despicably hosed.] 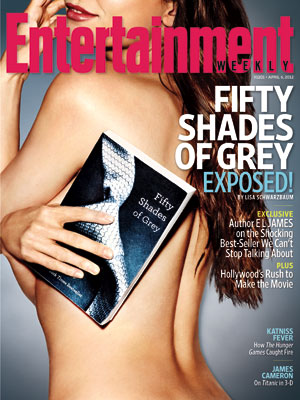