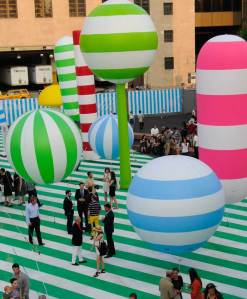 FriendsWithYou, the artist collective known for their fantastical theme-park style installations and who first came to popular attention with their beach-front blimp-filled procession in Miami in 2006, have announced that they’re moving from Miami to Los Angeles.

According to the Miami New Times, Samuel Borkson and Arturo Sandoval III, the duo behind FriendsWithYou, will be moving to a large new studio space they’re calling “the Gem” in the Los Angeles neighborhood of Silver Lake to be closer to their collectors and to grow artistically. And they’re not the only ones. Fellow artists Jen Stark and Alvaro Ilizarbe, Pres Rodriguez and Raul Sanchez are also trading coasts.

“We love Miami, but collectors here just don’t support our work,” Mr. Borkson tells the New Times. “The truth is that most collectors who purchase our work are located elsewhere.”

Filed Under: friends with you, Jen Stark, Samuel Borkson