In October 2010, as the menswear blogging genre really began to explode—with the popularity of standbys like Michael Williams’ A Continuous Lean going full-tilt and dozens of imitators popping up behind it—a satirical blog called Fuck Yeah Menswear emerged.

It was a Hipster Runoff-style satire of menswear blogging written in a stream-of-consciousness poetic shorthand. It was scathing, smart, and mostly funny. It was also written anonymously, leading some sites to even offer bounties for the identity behind the blog, the writer of which even emerged at one point to speak with GQ’s website (in character, of course).

Last August, it was announced that Fuck Yeah Menswear had nabbed itself a blog-to-book deal.

Around November, Fuck Yeah Menswear filed its most recent post, and then went off the grid.

Either way, the latter is now a moot point, as word of the blog’s identity is beginning to leak out. The Observer has learned (as has The Trad) that the editors of the blog are none other than Lawrence Schlossman and Kevin Burrows.

“Yep, it’s true,” Mr. Schlossman confessed, speaking to The Observer by phone. “I wrote Fuck Yeah Menswear, but I don’t do it by myself. My buddy Kevin Burrows, who lives in Los Angeles and works at Dreamworks Pictures does it with me.”

“His name as well as mine will be on the book when it comes out this November. He deserves to have his name and work highlighted and acknowledged as much as I do, he’s essential to this thing.”

Mr. Schlossman is a whirlwind of talents and channels to funnel them through: He has a day job as an associate editor at Complex. He Tweets under the handle “Sartorially I.N.C.” to hysterical effect (his running live Met Ball commentary was fantastic; his final note likened Florence Welch to an “endangered avian species“).

He also handles the Tumblr known as How To Talk To Girls At Parties, and the blog Sartorially Inclined, and has done social media work for the Park and Bond Tumblr.

Mr. Schlossman was originally singled out as a suspect behind the blog by The Fader, along with Grantland’s Chris Ryan (who, while he was once indeed a beloved anonyblogger did not make the cast of this one).

Mr. Schlossman was interviewed for the definitive (such as it is) Oral History of Menswear Blogging for GQ. He was quoted by the author Dave Greenwald on the subject of the then-anonymous Fuck Yeah Menswear:

I’ve always been of the belief that it’s definitely being run by a peer, there’s no doubt. You have dudes, and I know guys like this, I’ve become friendly with guys who know everything about the blogosphere but don’t blog, but there’s a threshold, like, oh my god, there’s no way, why would someone spend so much time learning every nuance of the community if he wasn’t participating? So whether Fuck Yeah Menswear was his way of saying, “Fuck it, I’m going to participate,” or some dude who has one foot in that world, I don’t know, but it’s someone who gets the subcultural—who knows the personalities and who knows the nuance of those personalities.

F.Y.M. then emailed Mr. Greenwald: “I’m not a blogger. Somebody lied.”

“That’s a riff on a Rick Ross rap lyric,” Mr. Schlossman laughed. “We love to re-purpose rap lyrics, and make them work in the framework in which that personality exists. Anybody who’d read the blog would get that.”

As for whether or not his employers knew of his side-project, they most definitely did: “Anyone who I’ve ever worked for is totally aware and supportive of the things I do on the side,” he explained, “one of which is getting to write this book.”

There is but one word with which to characterize the whirlwind success and inevitable outing that comes with an anonyblog like the one maintained by Mr. Schlossman and Mr. Burrows: 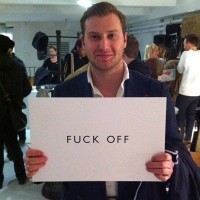