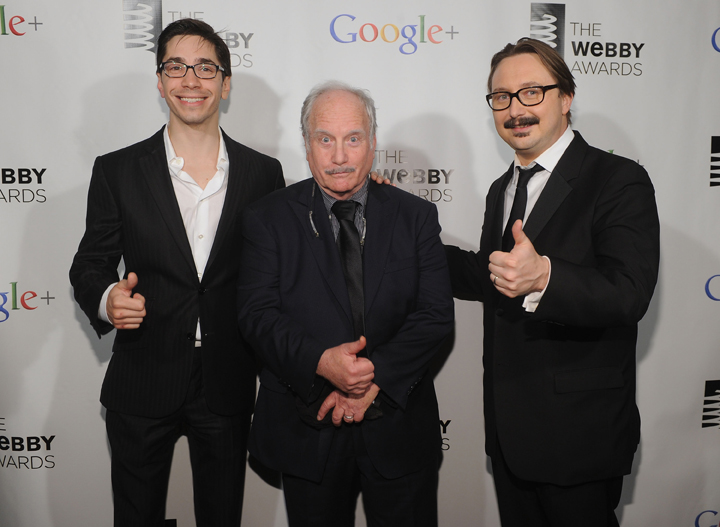 This is a guest post from Gary Sharma (aka “The Guy with the Red Tie”), Founder & CEO of GarysGuide and proud owner of a whole bunch of black suits, white shirts and, at last count, over 40 red ties. You can reach him at gary@garysguide.com.


It was Monday afternoon and after spending the morning hanging out with startup peeps at the TechCrunch Disrupt conference, it was time to head on over to the Hammerstein Ballroom for the 16th Annual Webby Awards (a.k.a. Oscars for the Internets!).

Thankfully the rain had stopped (it had been pouring cats and dogs and rabbits all day making everyone miserable). I groaned as I saw a long line leading up to the venue. But I wondered why everyone was wearing jeans and sneakers and carrying backpacks? Well thats cuz this was the line to catch the next bus to Jersey! I continued walking a few more steps and finally arrived at my real destination.

The lovely Shira Lazar (host of What’s Trending) was on the red carpet doing what she does best – interviewing celebrities. I flashed her a smile and made my way in. 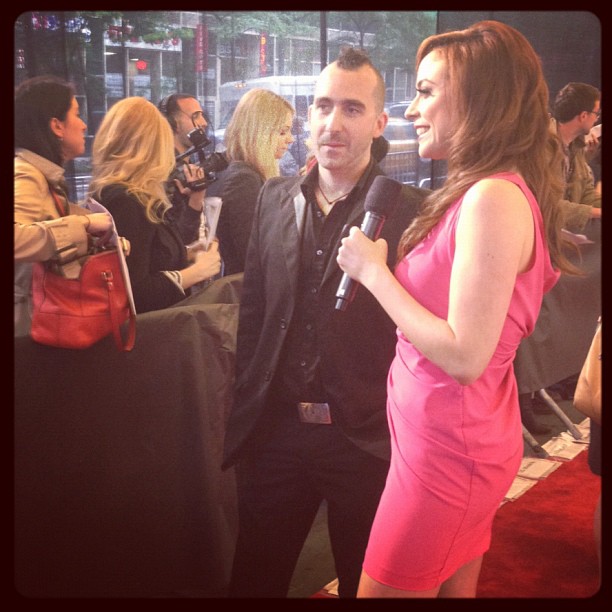 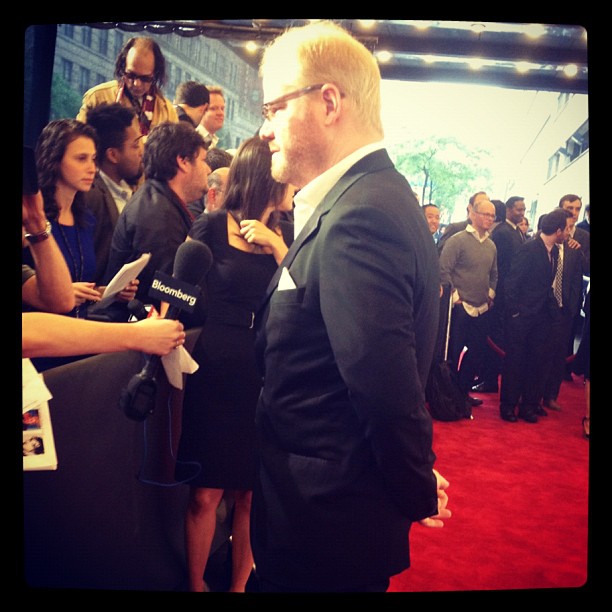 I ran into my tech-scene-hopping-comrades-in-arms Scott Beale and Rusty Blazenhoff of LaughingSquid. Rusty alas is only in town for a bit and going back to San Fran tomorrow. At the bar, I bumped into Thrillist managing editor (and Webutante Ball impressario) Richard Blakeley and girlfriend Lindsay Kaplan of Chloe+Isabel. “Loved your Internet Week writeup!” said Mr. Blakeley. Ms Kaplan and I attempted to take a few photos together but the crowded bar made it awkward. My vodka tonic came in a jumbo keepsake Webby branded glass. Nice touch! 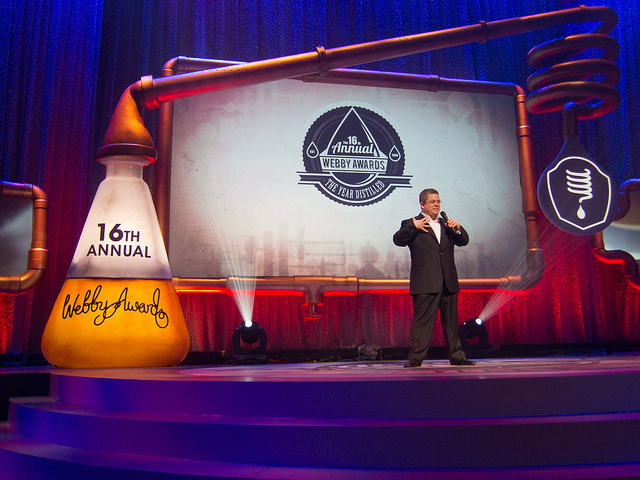 And now onto my highlights of the show…

New York City’s CEO / Mayor Michael Bloomberg was honored with a Webby Award for Lifetime Achievement for his work with the Bloomberg corporation. He was presented the award by Tumblr Founder and CEO David Karp. As Mr. Karp noted in his tribute speech, if it weren’t for Mr Bloomberg we wouldn’t have found the cost of Facebook shares until Monday. Real-time FTW, baby! Mr. Bloomberg’s five word acceptance speech? “Make it here, then everywhere!” Though it would have been more amusing if he’d gone with “I Can Haz Fourth Term?” 😉

It was pretty awesome to see die-hard Knicks fan Spike Lee on stage with Knicks wunderboy sensation Jeremy Lin. To say Mr. Lee was giddy like a schoolgirl would be an understatement. “Now this my man, right here. I wore his high school jersey. Wore his Harvard jersey.” said Mr. Lee. Mr Lin’s five-word speech: “Internet Fans I Love You”. 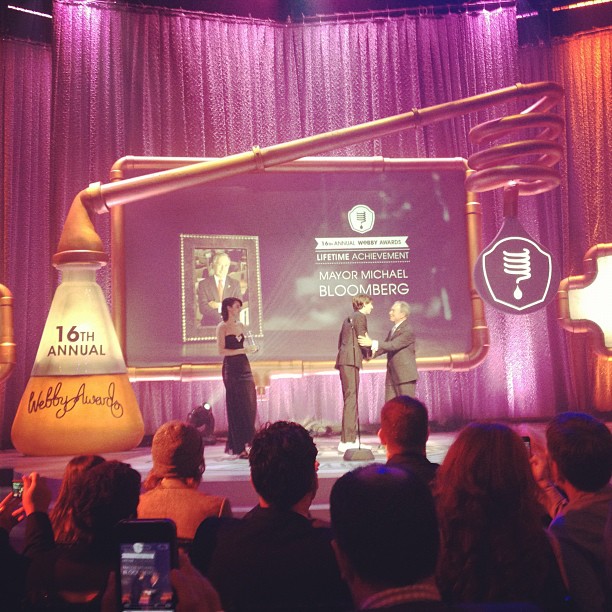 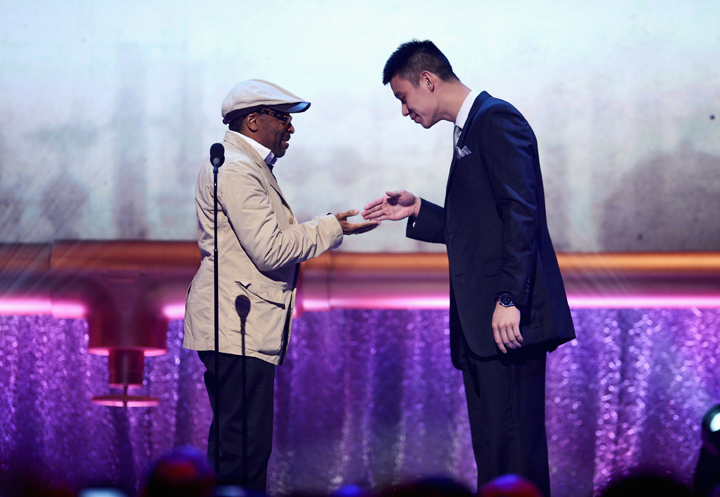 One of my favorite highlights from the ceremony was a minute-long video montage tribute to the late legendary Apple cofounder and CEO, Steve Jobs where a bunch of famous, influential folks thanked Jobs for his contributions to technology with five-word thank you speeches including President Barack Obama (“Thank you for thinking different”), President Bill Clinton (“For Spreading American Ingenuity Worldwide”), Vice President Al Gore (“Steve Jobs was insanely great”), U2’s Bono (“For Saving Lives With Red”), Jimmy Fallon (“He Made Turtlenecks Sexy Again”), Jon Stewart, Stephen Colbert, Sarah Silverman, Arianna Huffington and a bunch of other folks. “I only need one word” said President Obama. “Amazing.” Amen to that. You can watch the video here.

Bjork accepted the award for “Artist of the Year.” What, no crazy swan dresses? Color me disappointed! Five-word speech: “A-E-I-O-U!”

Instagram (fresh off its $1 billion purchase by Facebook) won the award for Webby Breakout of the Year. Founders Kevin Systrom and Mike Krieger were at hand to accept the award. Five-word speech: “This Here Requires No Filter”. 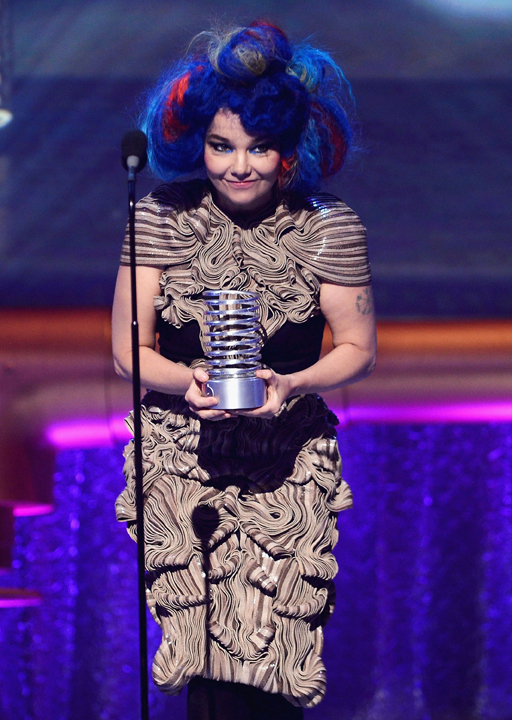 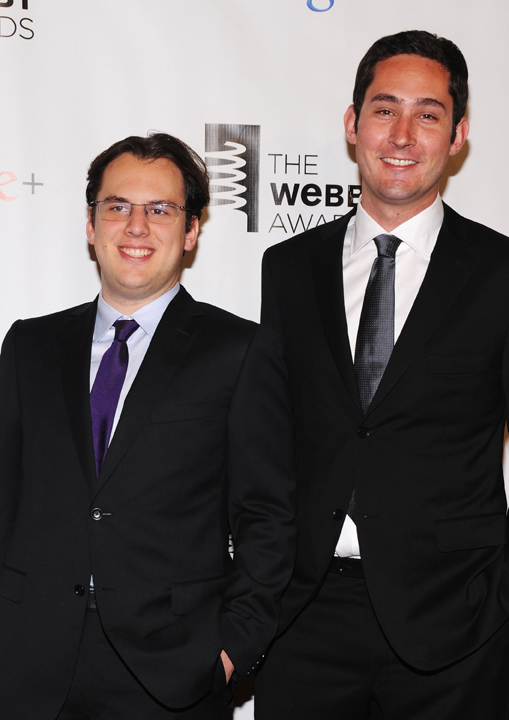 The Meme of the Year award went to Nyan Cat, edging out the popular “Texts from Hillary” tumblr.

And finally, Louis C.K. won the Webby Person of the Year award. Five-word speech: “When I Die, Bye Bye”. Yikes! Morbid much? 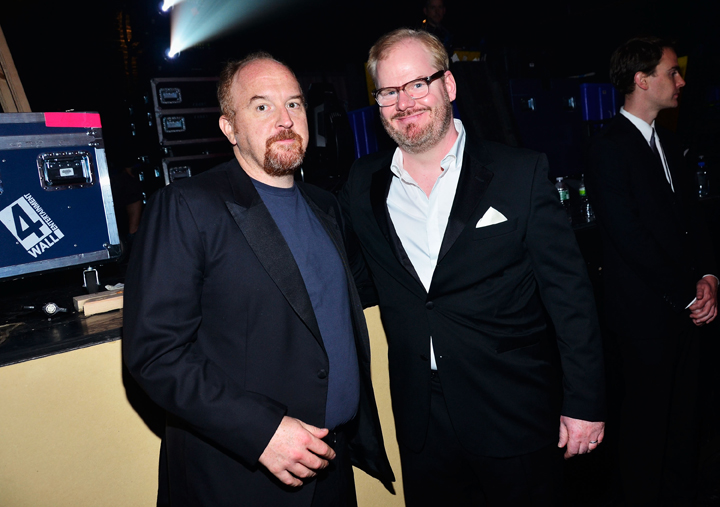 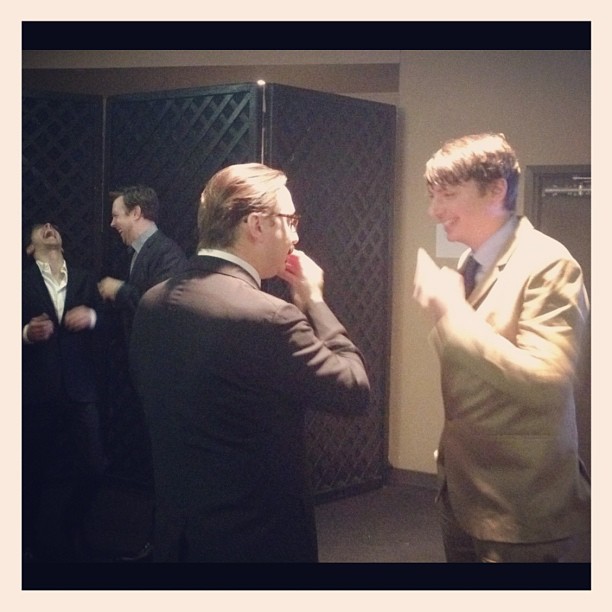 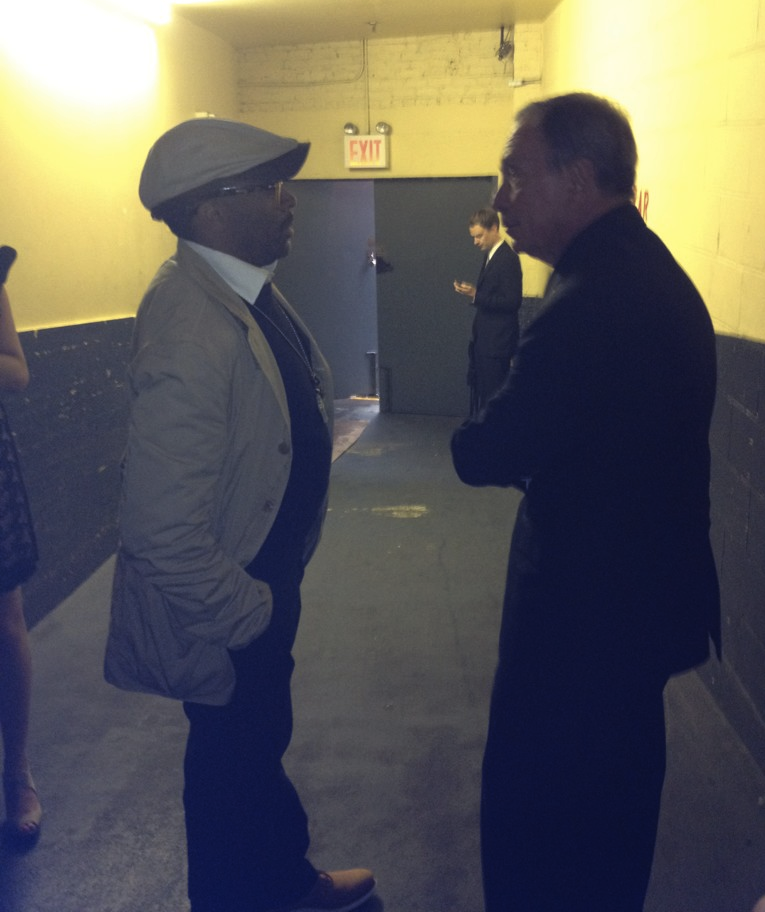 After the ceremony, as I got up, I bumped into Mr. Dreyfuss. I asked him to elaborate on some of his remarks from earlier that night regarding Facebook and Google. Ten minutes later Mr. Dreyfuss was still going strong. The guy can talk! (and enough material for another blog post or two! 😉 He expounded on what he felt was the dumbing down of America and the upcoming generations and how Facebook and Google were prime suspects in making that happen. We exchanged contact info and he invited me to California to learn more about some of the initiatives he’s involved in.

I said hello to Jim Gaffigan and fist-bumped Jason Sudekis. I ran into Mashable CEO Pete Cashmore and his lovely girlfriend Lisa Bettany from Camera+. “Still with the red tie!” smiled Mr Cashmore. “Always!” I smiled back. We chatted about Mashable’s new tech events section and the potential for collaborating and working together there. 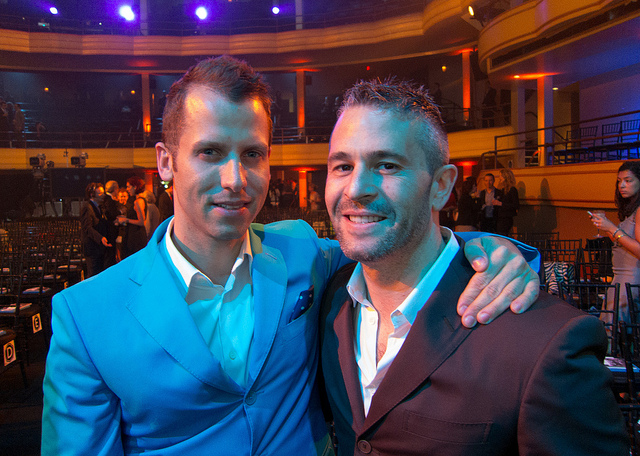 I chatted with an exec from Twitter. Twitter’s New York office has now almost 40 people, I learned, and the vibe there is very Mad Men! “How’s the monetization coming along?” I asked in my best oh-yes-I-went-there tone. I wasn’t able to get any hard numbers out of him but targeting is getting much better with the more data they’re collecting. “So, better than Facebook, eh?” I asked. That elicited a smile. And that lead to the discussion of how intense the tech rivalries are getting. Apparently mentioning Twitter inside Facebook offices is a big no-no. As apparently is mentioning Facebook inside Google and mentioning Google inside Microsoft. Why can’t we all just get along?

As I made my way outside I caught up with the lovely Jocelyn Johnson (who I hadn’t seen since SXSW!). Miss Johnson was accompanied by Sonia Gil Montero who picked up the People’s Voice Webby Award for Best Web Personality/Host for her online travel show Sonia Travels. And Miss Montero’s five-word speech was in five different languages. Killer! I mentioned how I’d been trying to pick up Mandarin and it was hard. We got in a discussion about different language learning techniques. Interestingly Miss Monteros has a startup Fluenz which aims to help users with exactly that. “Better than Rosetta Stone?” I asked “Yes!” she replied without hesitation. Gotta love the confidence! 🙂 I promised to check it out. 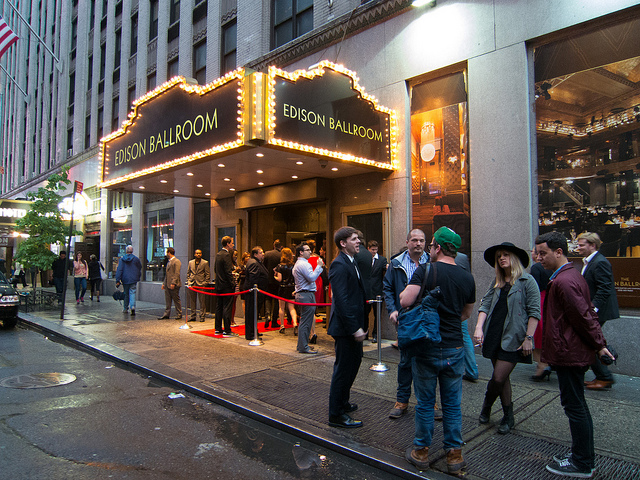 Later we all headed to the after-party at the Edison Ballroom where I ran into Rachel Sklar, easily one of my favorite people in the New York tech scene (super connected, super helpful and super nice). “I waved at you earlier to try get your attention!” she exclaimed. “So did I!” I replied. Ahhh, missed connections. Miss Sklar was excited about a new project she’s launching called TheLi.st.

Soon more people began arriving, the crowd became more energized and the music picked up. Time to put the networking on hold and hit the dance floor.

So there you have it, folks. A wonderful star-studded-booze-fueled evening celebrating the wonder that is the Interwebs ‘n the Internets. Until next time. Bye-bye! 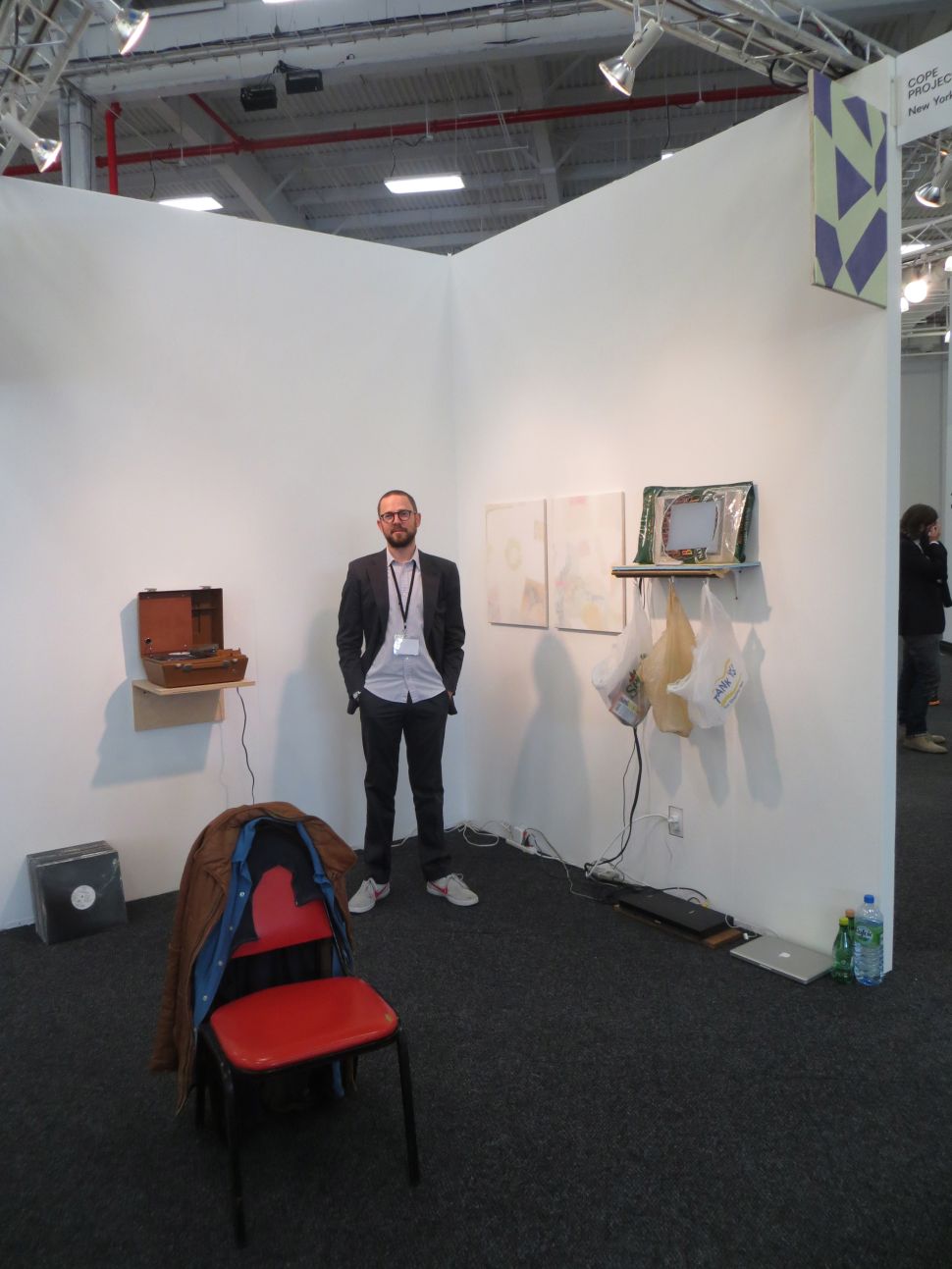