These questions regard last night’s episode of HBO’s Girls. Please answer the prompts with specific examples from LAST NIGHT’S EPISODE, though supplementary material will be accepted as a secondary source. Please write legibly. #2 pencils only. You have an hour to finish this test. See below for questions and example responses.

1. The episode begins at a warehouse party. Describe the scene in light of Bakhtin’s Theory of the Carnivalesque. How are characters altered and the relationships upended by this event, when the established societal rules are briefly suspended (i.e., “tits out for Christmas”)?

Bakhtin’s’s theory of carnival was actually published in a later version of his essays, Problems of Dostoyevsky’s Poetics, and the term “carnival” was used to explain what he considered the Russian author’s “”polyphony”: the ability of many voices to speak at once, interact with each other, and most importantly, strengthen individual arguments while finally being heard by one another.

While so far the show has focused on the four girls, with their male counterparts existing as comic relief or foils, this episode turns that around. Did anyone notice this was the first time Adam had been shown outside of his apartment? (Let alone with his shirt on?) We learn Adam is a much more complex character than just “Hannah’s jerk of a sex-buddy”; he’s a recovering alcoholic, an avid reader, and is building a barge to flow down the Hudson on the 4th of July! Also, he, like most characters, thinks Hannah is a narcissist for essentially using him for sex and for her “writing.”

If you go back and watch the previous episodes, especially the ones leading up to this one, Hannah’s relationship with Adam completely takes on another tenor. When he says “Relationships have an expiration date…you’re not having fun anymore,” Adam is actually hurting from Hannah’s “rejection.” She told everyone else he was her boyfriend, but she never expressed it to him. So when she came to his door and gave him that non-ultimatum ultimatum (He even prompts her, “So what are you asking?” to which she responds, “I’m not asking anything,”) we now know the altered subtext: Adam is waiting to hear what Hannah wants out of the relationship besides a fuck-buddy, and she never let him believe that he was boyfriend material, because she’s not the kind of girl who wants to go to brunch, or something.

Then there’s that reversal of Charlie and Marnie’s relationship: in classic Rachel/Ross fashion where the one character who has been keeping the other at arm’s distance only realizes how much they “need” their partner when they see them with someone else. Although whoa, Charlie must be some kind of pussyhound to find a new girlfriend in two weeks. Are we supposed to believe he had been cheating on Marnie? Is that where her disbelief stems from?

And even Elijah, Hannah’s gay ex-boyfriend, comes back from a one-note character to become a more fully fleshed-out character. His interaction with Marnie is priceless: I spent the entire episode trying to think which two characters make out in Rent. Was Marnie supposed to be Mimi and Elijah played Roger? I mean, I know this show gets criticized for being white-washed but come on. Plus, Elijah provides some insight into Marnie’s own egoism: she’s narcissistic about being necessary. Her world basically collapses when she realizes that every one of her friends (and her boyfriend) can live their lives as a semi-functional human being without being spoon-fed her sage wisdom from her 24 years on Earth.

Also, we learn that Ray is kind of into girls that hit him in the nuts. So he finally has something in common with Adam. We learn nothing new about Jeff, except that he can be a total asshole in addition to a creepy dad.

2. At the party, Shoshonnah smokes “a glass cigarette,” i.e., crack cocaine, resulting in a frenzied slapstick race with Ray. How does this scene shed light on the crack epidemic of the 1980s and ’90s, the thousands of lives lost and ruined, and the unfair sentencing guidelines that resulted in long prison terms for many minority offenders?

For me, this scene is less about crack and more about the fact that if a girl runs down the street screaming “rape” in Bushwick, apparently no one comes to her aid. Where are the crusties when you need them? 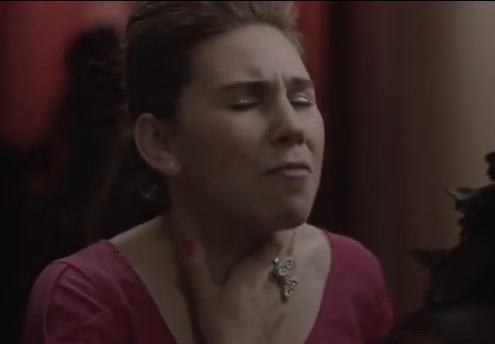