According to a list of “hot items” in the Republican National Committee’s online store, the top seller on the site right now is a t-shirt that features the peace sign made out of a B-52 Bomber. Accompanying this illustration is the old Ronald Reagan campaign slogan “Peace Through Strength.”

There are also stickers and buttons with the “Peace Through Strength” bomber logo in the RNC store as well as a cornucopia of other exciting items like an inflatable GOP elephant, and a jigsaw puzzle featuring a painting of George W. Bush playing a game of cards with his father, Reagan, Richard Nixon, Dwight Eisenhower, Teddy Roosevelt and Abraham Lincoln.

Gerald Holtom designed the peace sign in 1958 to serve as the logo of the British Campaign for Nuclear Disarmament (CND). He chose the shape in the middle that the RNC has replaced with a B-52 because it represented the combination of the shapes used to represent N and D (short for nuclear disarmament) in flag semaphore. By adding a B52 to the peace symbol, the RNC replaced a signal that stood for nuclear disarmament with the exact type of plane the U.S. uses to drop nuclear bombs. 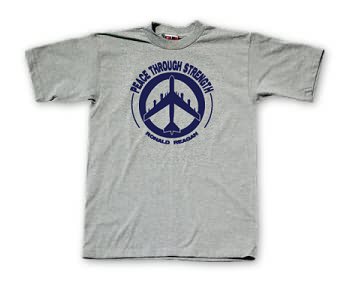