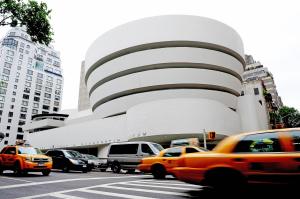 Should the Guggenheim receive $250,000 to restore its Frank Lloyd Wright-designed doors? Or would money be better spent refurbishing the façade and entryway of the Japan Society, which was designed by Junzo Yoshimura?

Visitors to a website set up by the National Trust for Historic Preservation can now vote on those and 38 other projects that have applied to receive grants of up to $250,000 as part of a program called Partners in Preservation organized by the trust and American Express. The top four vote getters will receive funding. Voters can cast their votes once a day through May 21.

While this all seemed, at first, to be a little unnecessarily cutthroat—and also prototypically American, letting voters (instead of, say, experts) decide who gets the cash—NY1 notes that an additional $2 million in funding will be allocated to various projects by an advisory committee. Also, just for taking part in the program, each institution will receive at least $10,000.

At press time, the Brooklyn Pubic Library’s proposal to replace the main entry doors of its Central Library is in first place, with nine percent of the vote.