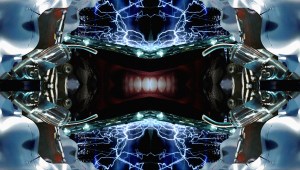 At around 9:30 last night, Andre Balazs arrived at the top of the Standard, the intimidatingly tall and starkly designed hotel he owns in the Meatpacking District. Which is to say, he arrived at the Top of the Standard, the sleek bar with wraparound windows on the hotel’s 18th floor, that is better known to most as The Club Formerly Known as the Boom Boom Room. Or just the Boom Boom Room. Or, well, let’s just say that this morning The Observer received an e-mail asking if we were at “Boom,” and we understood immediately what was meant. As Mr. Balazs passed the glossily made-up girls at the front desk, he was asked, “Will you be needing a table, sir?” but he ignored the question, glided past the girls and through the massive gilded door of Boom, took a lap through Downtown for Democracy’s jam-packed benefit hosted by über-hip L.A. gallery Ohwow, glad-handed with hipsters, caught a speech by Terry Richardson’s girlfriend Audrey Gelman (who, by the way, is legitimately involved in politics), then took the elevator 15 floors south and arrived, without having been missed, without seeming to have really disappeared at all, at his hotel’s Highline Room event space, where he’d laid out two long tables for a dinner in honor of his friend and colleague, artist Marco Brambilla, and lined them with bold-faced names. This is why Andre Balazs is the reigning maestro of the hospitality industry, and you are not.

But the matter at hand is Marco Brambilla and his jaw-dropping dinner party and his jaw-dropping new 3-D kaleidoscopic mash-up single-channel video installations which, even without the 3-D glasses you are meant to wear when you view them, convince you that someone slipped something dangerously hallucinogenic into your gin and tonic. (In, you know, a good way.) Or, in the case of this dinner party, your shot of Patron, bottles of which stood like sentinels on the tables. But more on that in a bit.

It is probably axiomatic that you are fancy if a car company throws a party for you. It is probably a corollary of this that you are super fancy if Ferrari throws you a party, and such was the case with Mr. Brambilla. But let’s not bury the lead by obscuring it with a car (even if it’s a really cool one): White Cube honcho Jay Jopling was there; Chinese/American megacollector Richard Chang was there; New Line Cinema CEO Bob Shaye was there; David Salle and Marina Abramovic were there; Theophilus London was there; an assortment of Bronfmans were there. At a certain point, everyone had to pause in their consumption of filet mignon, put on the 3-D glasses, and look decidedly goofy while watching Mr. Brambilla’s spacey new video RPM, which features a blinding array of spliced-together photographs including gritted teeth, flames and writhing bodies, and gives the general impression of cruising at a high speed on a race track. And this is as it should be, because it was commissioned by Ferrari, and is, in fact, a psychological portrait of a Formula One racer. Mr. Brambilla photographed the myriad images that compose it at the Italian Formula One Grand Prix in Monza. Yes, if you’ve ever wanted a glimpse into a Formula One racer’s psychic life, this is your chance. (This article, being pretty much a basic party report, is neither art criticism nor a psychological inquiry, but the short answer to what a Formula Racer’s inner life looks like would, according to Mr. Brambilla’s artwork, be: fast. Fast and…intense. So, no real surprises there.) The video is on a two-minute loop. The dinner guests didn’t seem to be aware of that, or maybe everyone was slightly tipsy, or tired, or hypnotized by what they were watching–the third scenario being the likeliest one–because after around five minutes Mr. Brambilla took off his glasses, pivoted in his chair to face his audience, and said, “It repeats!” (Personally, The Observer thought it would have benefitted from a soundtrack by Kraftwerk–after all, the press materials on it open with the promise that “the line between man and machine is blurred”–but you know, you can’t have everything.)

There were, ineluctably, speeches. First up, Mr. Balazs, who was likely inspired by his elevator ride. Since he opened the Standard a few years ago, its elevators have featured a Brambilla video, Heaven and Hell, running on two screens, so that you feel like you are encompassed by it, which, depending on your mood and who you’re with, is either really cool or kind of scary. Mr. Balazs began by observing that without Mr. Brambilla, his hotel would have been “lame,” or something to that effect. It’s about as easy to imagine Mr. Balazs doing something that would merit the adjective “lame” as it is to picture Mitt Romney being the president of the United States, but we’ll take his word for it. He went on about how thrilling it is to work with someone who has an “unusual approach” and is willing to tackle things that are “out of the ordinary.” What you see in the elevator, he explained, is an epic rise from hell to heaven and back down again. You descend as you ascend. “Marco is a visionary,” he said and added that there are very few people who are so “childlike”–here, someone called out reassuringly, “It’s a compliment, Marco!”–“in their ability to perceive and appreciate the most wonderful things in life.” This conveniently conformed to the dynamic at work last night: the glitzy hipsters were upstairs partying with Ohwow’s A-Ron “the downtown don” Bondaroff; the glitzy swells were downstairs swilling Patron with Jopling, Shaye, Bronfman, & Co.)

Next up was Vanity Fair scribe Bob Colacello. He began by saying that he first encountered Mr. Brambilla’s video work in the elevator of Mr. Balazs’s Raleigh Hotel in Miami. The video in question features, he reminded everyone, “1,789 couples having sexual intercourse, none of whom ever achieve orgasm.” Not long afterwards, Mr. Brambilla contacted him, about a video he wanted to make about the life and times of Andy Warhol–Mr. Colacello was close to the Factory scene–and was looking for audio tapes. “We have our apocalyptic lunches occasionally, where we convince each other that the end of the world is just around the corner, and it’s all because of lack of imagination among young people because of technology,” Mr. Colacello revealed. “Of course, no one uses technology more creatively than Marco.” He first saw the Standard’s Heaven and Hell video in a Catholic church. “All these priests came marching in, and altar boys, chanting Latin as Marco’s Hollywood images were floating over our heads,” he said. “And I was with a South American tycoon and his wife”–let’s just pause for a moment to observe that, of course Bob Colacello was with a South American tycoon and his wife–“and they were like, ‘Oh, this is everything we love! Catholicism and contemporary art!’ And I texted Marco and said you have to do this in every Catholic church in the world. You could save the faith.”  He followed that up by saying that Mr. Brambilla “understands the absurdity at the heart of late 20th-century Western civilization, or late-stage Western civilization, and is able to walk this fine line between the profound and the superficial.” Okay, Bob!

Then, finally, it was Mr. Brambilla’s turn. “Thank you everyone for coming,” he said, and then talked about working with Ferrari on the commission, and then urged everyone to watch his video. Which everyone then did. Or maybe it was the other way around. Maybe the video came before the speeches. We might have written this slightly out of order, but it seemed only appropriate. Once Artlog.com founder Manish Vora, who was seated to The Observer‘s right, cracked open the nearest bottle of Patron, that is how the night started looking: slightly out of order.