Henry Blodget—the pale firecrotch king of Business Insider, whose greatest moment of intimacy with Jews came when one banned him from the securities industry for life—can’t decide who hates Jews: Is it everyone, or just some people? Or maybe it’s just him?

For some reason, Blodget has authored a troll-baiting piece on Business Insider asking why people do not like Jews.

The post initially looked like this. Note the slightly conspiratorial Hasidim and the assumption that “people” (non-specifically, in general) hate Jews: Now it looks like this. Note the beautiful Hollywood Jedi/Jewess Natalie Portman, who is non-threatening and beautiful, and the clarification that only “some” people hate Jews: Rather than link to it—or even, for that matter, bother reading it—let’s just look at the superficial product he’s produced here, which is likely to be the majority of what most people engaging in this will give anything resembling serious consideration to (a result partly produced by Blodget’s commitment to headlines that write checks the stories below them can only occasionally cash).

Seeing as how Blodget himself is not Jewish, this is an odd question to ask, considering every race, religion, culture, ethnicity, nationality, and so on has been hated by another. If I were to ask, “Why do people hate Thought Catalog writers?” I would expect—and hope—the general population would assume I hate Thought Catalog writers, because I am “people.” I am speaking as a “person.”

In other words, to have a persecution complex about a religion you are not of might invite one who is of that religion (like the author of this blog post) to ask him:

Why do you think people hate Jews? Is it because you hate Jews?

For the record, I don’t think Henry Blodget hates Jews.

I’m pretty sure he even has a few in his employ who he doesn’t whip while building his SEO pyramids on a daily basis.

And I don’t wonder whether or not Henry Blodget knows this might not be the best way to have a discussion about race and ethnicity and Anti-Semitism. Not that candor isn’t appreciated, but The Internet Being What It Is, his post will no doubt invite a slew of nasty comments that will muddy anything that could remotely resemble an intelligible dialogue. And Henry Blodget is intelligent enough to know that this is the case, because he runs a business on the Internet.

Henry Blodget knows this is not the best way to have a discussion about race and ethnicity and Anti-Semitism.

The only possible motivation for writing a headline like that is to attract attention, and pageviews, and it’s the kind of attention that will (naturally) only inflame parties on all sides (be they Jews, Jew Haters, Self-Loathing Jews, and so on). You can rest assured that whatever genuine intellectual curiosity Blodget has about this issue—and compassion towards marginalized and/or persecuted peoples, which I don’t doubt he has—was made a moot point by that headline.

And as a Jew, I can tell Blodget, this does not necessarily help our cause.

All of which is to say: Blodget does love a juicy headline, and if he found the question at hand worth asking himself, well, it’s obviously worth asking of him. Even if it’s unfair to assume that Henry Blodget hates Jews. 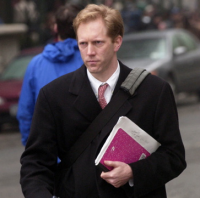