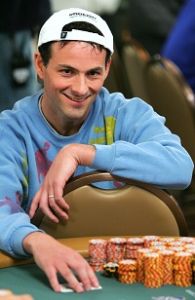 LAS VEGAS – AUGUST 07: David Einhorn of New York competes in the World Series of Poker no-limit Texas Hold ’em main event at the Rio Hotel & Casino August 7, 2006 in Las Vegas, Nevada. Einhorn finished the day in third place with almost 7 million in chips. The main event, which began with more than 8,700 players on July 28, was narrowed to 27 players today. The last nine players will compete for the top prize of $12 million on the final table, which begins August 10.