To hear Charlie Rangel tell it, he received his congressional district in 1970 as a birthday present from Governor Nelson Rockefeller. Mr. Rangel described his gift from the governor in a little noticed portion of his 2007 autobiography, And I Haven’t Had a Bad Day Since. It’s an interesting tale to revisit in light of the current race for Mr. Rangel’s seat and the furor over the shape of the district that defined this year’s redistricting process.

It was a summer day and the man who is now the fourth most senior in the the House of Representatives was in his second term as a New York State assemblyman and preparing to make a run for Congress against a powerful incumbent, Adam Clayton Powell. Mr. Rockefeller called Mr. Rangel to an office in the State Capitol building in Albany.

“There were all these guys on the floor poring over a map of the state of New York. They had slide rules and string, and grease pencils and data about the population of the various counties and cities from the recent census,” Mr. Rangel wrote. “They were actually drawing the congressional district reapportionment lines for the 1970 elections.”

Mr. Rockefeller smiled, wished him happy birthday and handed him a pencil.

“I proceeded to draw myself a wicked district in Manhattan,” Mr. Rangel wrote.

Mr. Rangel has since earned a reputation as one of the G.O.P’s most outspoken opponents on Capitol Hill, but during his years in Albany, he developed what he described as a “special relationship” with the Republican governor. Though Mr. Rangel has always been a Democrat, in his early congressional campaigns, Mr. Rockefeller arranged for him to run on the Republican line too. In 1972, a billboard on Broadway proclaimed “Re-elect President Nixon and Congressman Charles Rangel–both Republican.” Later on, he would make Nixon’s enemies list.

The congressman held on to his tailormade congressional district for over forty years thanks to an Albany tradition, which dictated the dean of the delegation got their district drawn before the rest of the map was figured out. This year, Mr. Rangel’s allies in Albany attempted to draw him another favorable district, but their plan fell through. 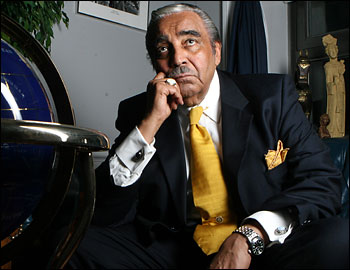