How good was Eli Manning on Saturday Night Live this weekend? Better than we expected, right? In general, we don’t hold up much hope for sports celebrities making it through an entire show without fumbling over the teleprompter while the imminent smell of fear wafts out of our flat screen, and yet Lorne Michaels seems determined to keep bringing them back. (Which reminds us: Charles Barkley, please don’t return next season!)

But the younger Manning brother was actually pretty good: what he lacked in verbal dexterity, he made up for in physical comedy. (We loved the video game/Tebowing sketch for this very reason.)

However, it wasn’t any of the sketches, or even Tanning Mom on Weekend Update that had us grabbing our remote to rewind again and again…it was the Fox & Friends cold open with Fred Armisen as Rupert Murdoch. Were you able to catch the Trayvon Martin references hiding in the “corrections” part of the credits?


Though the sketch never referred to the death of Trayvon Martin directly, the fact-checker portion of the segment, with its fast-scrolling corrections, has previously been noticed by numerous media outlets for its Easter eggs, leading us to believe that none of these buried jokes were meant to go unnoticed. Two of the items that are super-imposed on Taran Killam‘s face seem to be direct references to the tragic killing of the Florida teen:

– John Wilkes Booth was not wearing a hooded sweatshirt when he shot President Lincoln, nor were the Lincolns attending a staged reading of The Vagina Monologues

We’ve compiled screenshots of the entire ‘Corrections’ portion of the segment as best we could: 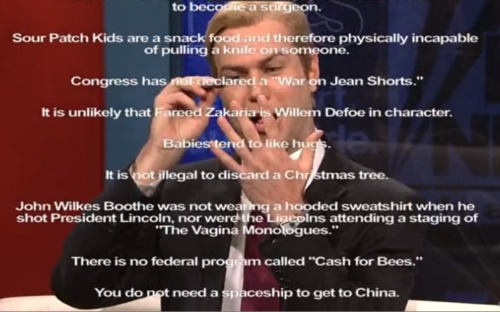