TEANECK – After diving into a five-month slugfest together, the contestants in the CD 9 Democratic Primary appeared poised to strive for aloof statesmanlike sound bites tonight in their News 12 debate.

But it didn’t work out the way.

In a political insider environment fast branding him too punch happy, a more toned down U.S. Rep. Steve Rothman initially presented himself for his faceoff with U.S. Bill Pascrell.

With internal polls in both camps showing a tigher than expected race, including an internal Rothman poll that shows the Bergenite leading by four points, within the margin of error, according to a source close to the campaign, Pascrell attacked.

After a mutually rough month of debate appearances, Rothman tried to stay away from zapping Pascrell. He highlighted his own stances on the issues, and then caught Pascrell’s Garrett gibe.

“When some people voted to build a border fence, I voted no,” said Rothman, who added that he voted no on drilling off the Jersey Coast.

Unlike Pascrell, he said.

“How do we compromise? You compromise as I did when we almost lost the healthcare bill as we did,” he said. “I stepped in to bring those pro-lifers and pro choice supporters in. We would have never had a bill. I believe in Roe versus Wade and would never vote to change it. …I supported President Obama’s agenda 94% of the time – more than my opponent. That (drilling) bill was a bill to make sure we had a standard.”

He asked Pascrell if he felt so impassioned on the subject why he didn’t himself move to challenge U.S. Rep. Rodney Frelinghuysen.

“Mr. Pascrell did not have to move,” said Rothman. “More of his district went to Frelinghuysen than mine went to Garrett’s.”

The crowd straightened when Prof. Alain Sanders of St. Peter’s College in Jersey City asked the two men why they aren’t members of the progressive caucus in Congress.

“I don’t want to be bound by any group think,” said Rothman.

“I chose to do what I did in the New Jersey Assembly, which was not join any groups,” said Pascrell. “The only caucus I’m proud of being part of is the Democratic Caucus.”

Each tried to get the edge on the other by acknowledging working class roots as a prerequisite for standing up for the working class.

“He was pretty great with his hands,” Rothman said of his father. “He and a Mr. James Edge built our house in Englewood.”

“I’m the first member of my family to graduate grammar school,” said Pascrell, grandson of Italian immigrants and a proud U.S. Army veteran.

At first, they gently drew distinctions without descending into name-calling. Pascrell kept on his middle class fighter theme.

“There are spectators and there are fighters. Being off the streets of Paterson, New Jersey, I’m a fighter. That’s what this election is all about.”

Sanders asked what course they would favor if the U.S. Supreme Court strikes down the Affordable Care Act.

“If the Supreme Court strikes down that mandate, I would consider healthcare for all,” Pascrell said. “This is one of the reasons Bill Clinton endorsed me. I will do anything to make sure it doesn’t depend on how deep your pockets are in order to get healthcare.”

Rothman said,  “They would be dead wrong. This is the consequence of having rigidly conservative justices on the Supreme Court. I’ve been an advocate for Medicare for all since 1996. I held ten Town Hall meetings. I held more Town Hall meetings than any other congressman from New Jersey. Thousands of Tea Partiers came out but I faced them.”

Asked about regrets, Rothman said he would have not voted for the Iraq War if he knew then what he knows now. Pascrell too said he most regrets his vote in October of 2002 supporting the Iraq War resolution.

“Six months later I regretted that decision, and announced it publicly,” Pascrell said. “It was my mistake. I didn’t blame the president. I didn’t blame his henchmen. I made that mistake.”

The two men took a question about the Citizens United Supreme Court decision, which overturned a federal provision barring corporations and unions from paying for political ads.

“We need to have a constitutional amendment to allow states and municipalities to limit the amount of money that can be given to campaigns,” said Rothman, who noted that he sponsored a similar piece of legislation when he first arrived in Congress.

“You’re first in everything,” Pascrell cracked.

“Thanks for noticing,” Rothman said.

“I think we should be in better shape than we are,” said Pascrell, who then added that he was the first who introduced legislation to overturn Citizens United.

Progressives here introduced both men with regret, recollecting a 2011 Republican victory during redistricting that forced Pascrell and Rothman against each other.

The host sadly invoked the first known public characterization of this primary as “a tragedy.” 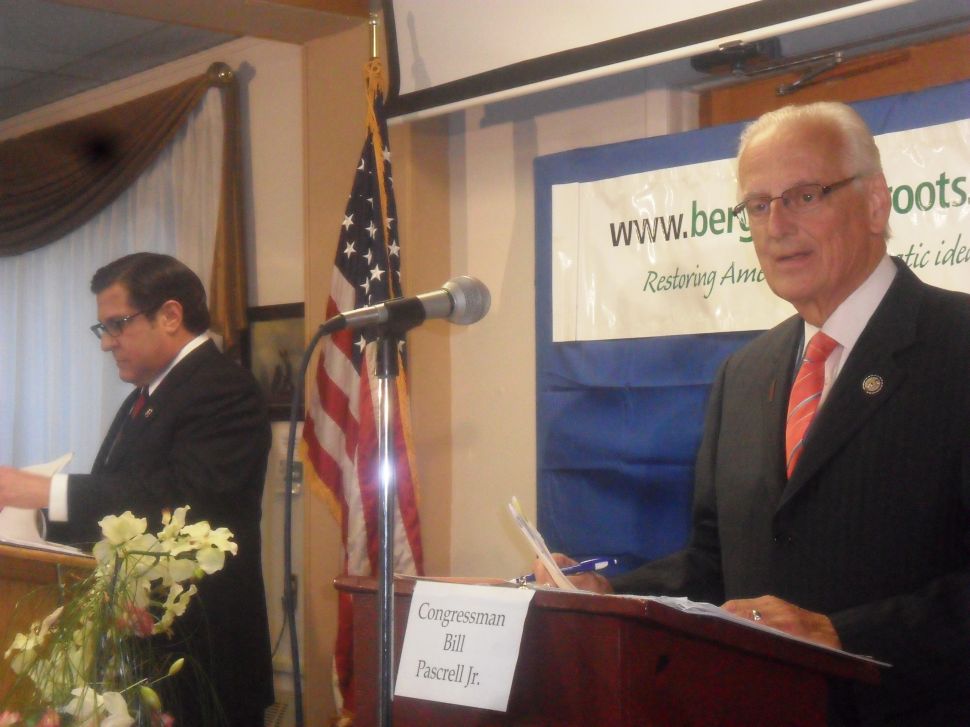