Longtime observers and combatants uncrumpling themselves from yesterday’s Election Day carnage said the mayor’s race in Orange was uglier than any prior contest in the urban Essex County burgh.

An infusion of funds from public sector unions, including a television ad buy, catapulted Warren into a two-way race with the mayor, infuriating the other two challengers, Councilman Edward Marable, Jr., and Janice Morrell, who feared a riposte between two bulked-up political insiders.

Following the results last night, the Communications Workers of America (CWA) took part of the credit for toppling Hawkins, who came to power four years ago as the 28-year-old son of a former assemblyman of the same name and frontline local ally of state Sen. Richard Codey’s (D-27).

But the losers questioned how the taxpayers of Orange could be served by Warren, who needed over $100,000 – and likely well over that, and became the small-box star of repeated television ads – to attain a part-time, $25,000-per year gig.

One source speaking on condition of anonymity predicated the mayor’s downfall on his decision last year to lay off workers, then rehire them with the “savings.” About 50 employees initially received the ax. Some subsequently came back to work, but opponents said the administration never adequately accounted for them, one source said.

Warren’s opponents complained about the challenger campaigning with former Mayor Mims Hackett, who served a federal jail sentence for corruption.

Yet the mayor’s enemies never could swallow Hawkins’s own efforts to create a job for himself as fire director prior to exerting what they said was a heavy hand in accessing Orange’s work force. 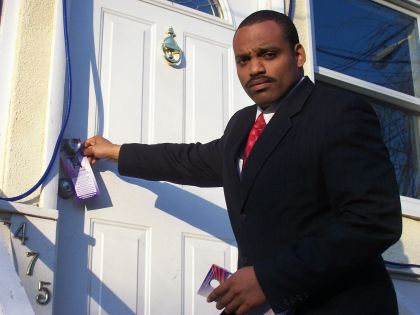