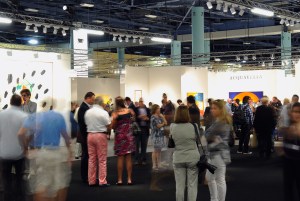 Can you spot the first-timers? (Courtesy Getty Images)

With Frieze rolling into a big tent on Randall’s Island this week, Gallerist had breakfast at the Ace Hotel with seasoned art advisor Todd Levin. Director of the New York-based Levin Art Group, Mr. Levin has attended over a hundred art fairs since he started doing business. We pretended to be a first-time collector who’s decided to work with an art advisor and somehow finagled super-VIP access. He humored us.

It’s VIP preview day! But I forgot my watch! (And my phone.)

In order to tell what time it is on the day of an art fair vernissage, I’ve found that glancing at the average heel height on women’s shoes is as accurate as the USNO Master Clock. If you see predominantly flats to two inches, that’s the first-tier VIP vernissage entry between 11:00 a.m. and 2:00 p.m. Two- to four-inch heels means the second tier of VIPs have entered, and that means it is between 2:00 and 6:00 p.m. These women won’t be there as long as the first group, and want to stay into the evening when the fashionista crowd enters. If you predominantly see women tottering on heels that are four to six inches or higher, then the third VIP tier has entered and it’s now after 6:00 p.m.

The first hour is going to be nuts, right?

The hype is only real to those who allow themselves to be sucked in by it. At Basel last June people were acting completely puerile, jumping the gates before 11:00 a.m. If a VIP vernissage opens at 11:00 a.m., I’ll probably walk in with my client at 11:30, so we don’t have to deal with that initial crush. The initial foaming frenzy of desperation some people get wrapped up in is one of the extreme negatives of any fair.

But it’s all good because I know what everyone’s bringing.

If an advisor has done their due diligence, they’ve gotten packing lists well in advance of the fair from each gallerist who will be attending and offering artworks their collector is most interested in.  The collector will have already isolated (and potentially purchased) the work or works that might be most crucial to their specific interests in advance of any fair.

If I miss the boat on a piece, it’s not the end of the world?

Remember that at a fair like Frieze, a fair of predominantly younger/new art, if you see something by an artist and it is already sold, there will likely be another similar work by that artist available in the near future. In the past five to 10 years a certain corporate/branding production has become a dynamic at fairs. Fairs have changed since the 1980’s, when there was time to sit down and have a meaningful discussion with a gallerist while you considered the implications of a new purchase. There was no jumping of gates, and far less of a young artist pedophilia/IPO approach to collecting. But sadly, that’s now the new normal.

More than one gallery at the fair shows this artist I like. Whom should I buy from?

It’s important to support hometown galleries wherever you live, but you should also find out who the artist’s primary representative is because that gallery will be directing how the work moves from the studio to the marketplace in many cases.  But a collector should try to remember that the most valuable aspect of an international fair is that all these gallerists are gathered under one roof at one time. Fairs aren’t primarily about buying art. That’s a misconception. Buying art is the aftereffect. A good advisor will set up meetings for a collector with a number of gallerists where they can meaningfully talk one-on-one; the real value of a fair is in building these personal relationships. It’s best not to think of fairs as a transactional modality, but rather as an educational opportunity.

I think I want this piece, but I’m not sure. I’ll just put a reserve on it.

I don’t believe in exercising holds whilst at fairs. It’s unfair to the gallerists, who are there under financial pressure. Things held for me in advance of a fair are done with the proviso that it is only subject to my visual inspection. Meaning that unless it is damaged or misrepresented, I will buy it.

People have a misconception that 10 percent is standard. Every discount is negotiated on a case-by-case basis. A good advisor knows when to push, and when not to. Sometimes advisors have better access when it comes to discounts, meaning that a collector on their own might receive 10 percent, but with an advisor they might receive 15 percent (or more). Sometimes if a collector is new but has the potential to become a good client, a dealer might offer a slightly larger discount in order to strategically build that relationship.

I guess if I get special treatment, I can’t expect a discount.

A relationship with an advisor can also jump a collector to the front of the line for a coveted or harder to access artworks, ahead of more established clients of the gallery. In that case the gallerist might not be comfortable giving a discount—the favor was implicit in that they offered the artwork to the new client in the first place.

Maybe I shouldn’t be pushy; the artist is young.

If it is a young artist/gallery and a relatively inexpensive work, let’s say under $20,000, I don’t believe in asking for a discount because you’re taking money out of a young artist’s and/or young gallerist’s pocket, money that is needed to pay for a gallery and/or studio at the beginning of a career.

Wait—why is the price in euros?

Because the gallerist has to pay the artist in their local currency. You can offer to pay in another currency, but in the end the gallerist will calculate the sales price based on the conversion rate of whatever day you wire the money.

I don’t know a lot of galleries that accept them. But I made a $40,000 purchase recently on my AmEx for a client. Years ago, I made a $100,000 gallery purchase on a client’s behalf with my AmEx.

I’m private about how I spend. I don’t want anyone to know I bought this thing.

If it’s a new piece by a living artist, the dealer will have to tell the artist. The artist has a right to know where their work goes, and often that is contractual. I’m a big believer in discretion. You can be a far more effective collector the longer you fly under the radar. You will continue to be offered the best artwork at the best prices if you prove yourself to be a person of integrity and discretion.

Now, I just have to avoid sales tax by having it shipped to my country house in Provence.

Only if it is your legal primary residence, defined as where you spend half a year plus one day each calendar year. That’s 186 days annually, and 187 if it’s a leap year.

Fine, I’ll take it to my
New York apartment. Right now! I’m having a party on Friday night.

It’s possible, if you can arrange shipping within the legal/union guidelines at a fair—there are a lot of rules and regulations. But it’s not wise to take possession of an artwork until such time that you have paid for it and the funds have been cleared, because until an artwork is paid for in full, legal title hasn’t transferred to the new owner—meaning the collector does not actually own the artwork, so it’s not yet covered by the collector’s insurance, and if it gets damaged, it is a logistical nightmare.

My party was terrific, even without the artwork on the wall. But now it’s Monday and I’ve heard of this dealer at the fair who hasn’t sold a lot. Maybe I should make a cruel and offensive offer…

There are certain collectors who on the final day of a fair will, vulture-like, pinpoint those galleries who have traveled a great distance at great expense and not done well financially to see if they can leverage such a situation. As a strategy it’s pretty odious. If you do such a thing, you should ask why you’re collecting art in the first place. In such a case, you might be better served by engaging such a ham-fisted strategy with stocks or other financial instruments. Does a collector want to be the person that gallery remembers walking into their booth for that kind of treatment?

Everyone seems to be calling themselves a curator these days. Are art fair organizers curators?

It’s been a wild ride. Perhaps art fairs could use some pharmaceutical help. What do you think, uppers or downers?

Art fairs can already be a fraught enough situation for some people emotionally. I can’t think of any art fair where an upper would be a good thing. Downers would probably be of more…assistance. Maybe if they just regularly misted the air inside the tent with aerosol Klonopin?