Today in The New York Times, a wonderful report emerges about karma, and mantras, and about people putting themselves in unenviable positions that has nothing to do with yoga so much as the go-around-come-around things embattled JP Morgan führer Jamie Dimon once said at a dinner party that are now making the rounds (and making him look not so great).

Gretchen Morgenson reports on the gossip in the wake of a JP Morgan-sponsored dinner party last month for the bank’s moneyed Dallas clientele, where Dimon decided to take some questions. One of them was about the pro-banking regulation views of Paul Volcker and the president of the Federal Reserve of Dallas, Richard W. Fisher.

Mr. Dimon responded that he had just two words to describe them: “infantile” and “nonfactual.” He went on to lambaste Mr. Fisher further, according to the attendee. Some in the room were taken aback by the comments.

Let’s be real, here: This isn’t so bad. People in Dallas were “taken aback” by Lamar Odom. Of course they’re going to be a little shocked when a guy who is constantly under assail for flaunting banking regulation on the whole whips out some “real talk” and bangs it on the dinner table in order to kowtow to his Lone Star State pals. He could’ve done much worse.

We’ll be here all week. Don’t forget to tip the obese Indian guys at your table on their way to prison. Hey-yo!

At JPMorgan, the Ghost of Dinner Parties Past [NYT] 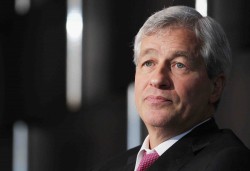