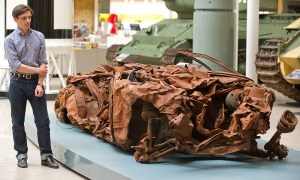 British artist Jeremy Deller, whose work regularly flouts the established boundaries of mediums, genres and styles, will represent his country at the 2013 Venice Biennale, The Guardian reports.

Mr. Deller, who charmingly describes himself as a “not technically capable person,” won the Turner Prize in 2004. As the paper notes, he’s been on a winning streak of late:

“His crowd and critic-pleasing retrospective, Joy in the People, at the Hayward Gallery in London – which featured a recreation of his boyhood bedroom and a Lancashire cafe serving tea throughout the show – has just closed, and his lifesize bouncy castle Stonehenge, his contribution to the Cultural Olympiad, is on tour.”

The artist, who is represented in New York by Gavin Brown’s Enterprise, last had a museum show here in 2009, when he showed a car that had been bombed in Baghdad, installed a lounge and offered up 33 experts on the war in Iraq to chat with visitors.

According to the paper, the artist “promised meekly ‘to do my best'” at the Biennale.