At an event in New Hampshire today, Vice President Joe Biden launched the latest salvo in the Obama campaign’s continuing attacks on Mitt Romney for his work at the private equity firm Bain Capital. He defended the validity of discussing Mr. Romney’s career and characterized Bain as a parasitic corporation.

“Governor Romney has a trump card, he says. He says he is better qualified to be Commander-in-Chief because of his business experience. … So look, he raised it. So let’s take a look at his business experience,” Mr. Biden said. “You hear all these stories about his partners buying companies … where they load up with a tremendous amount of debt. The companies go under, everybody loses their job, the community is devastated, but they make money. They make money even when a company goes bankrupt, when workers lose their jobs.”

The Romney campaign has retaliated against past criticism of Mr. Romney’s tenure at Bain Capital by characterizing it as an attack on private equity and highlighting comments made by Democrats who have expressed disagreement with the focus on Bain. Mr. Biden echoed the message the Obama campaign isn’t attacking private equity as a whole and rejected the notion Brain shouldn’t be an issue in the election.

“Vice President Biden today claimed the Obama Administration’s economic progress ‘cannot be denied.’ He must not be talking to the millions of Americans who are suffering from declining incomes, fewer jobs, and skyrocketing household costs in the Obama economy,” Romney spokeswoman Andrea Saul said. 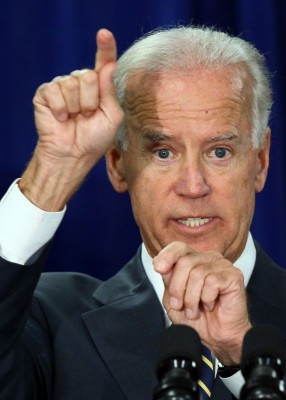