Which one of these guys is the “cool” one again? (YouTube)

Here are two blasts from the pasts: Joe the Plumber (real name: Steve the Plumber Wurzelbacher), and those Justin Long/John Hodgman Mac vs. PC ads. And if you combine them together, add some plutonium, and take your DeLorean back to 2004, Joe t. Plumber’s campaign for a seat in Ohio’s 9th congressional district taking the form of those Mac ads would be very a timely piece humor…like something you’d see on a Frank Caliendo stand-up special.

In this congressional campaign video, Joe the Plumber is the Mac/Conservative who goes up against an old, balding protester in a Hawaiian shirt, which we guess is how Republicans view liberals/PCs. Just an ole’ bunch of hippies. White, middle-aged hippies.

I’m not sure how well this will run in Ohio, but these two definitely have a career on the Borsht Belt if this whole Congress thing doesn’t work out. 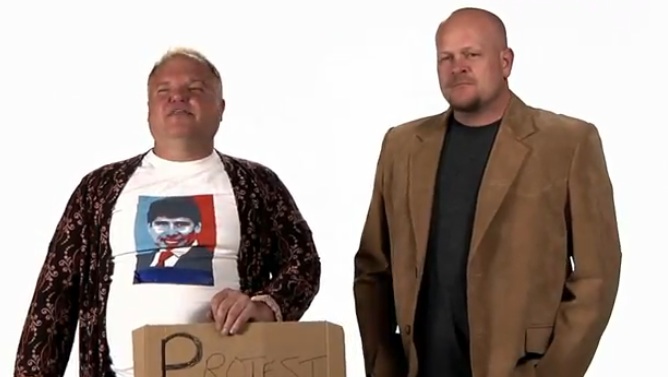