Longtime Gagosian director John Good has left the gallery. He had been with Gagosian since the mid-1990s, and was based at its headquarters at 980 Madison Avenue. News of his departure was confirmed by a call to the gallery.

Unconfirmed rumors from a handful of art world sources have him landing in the private sales department at Christie’s, though calls and text messages to Mr. Good were not returned.

“We do not comment on market speculation and rumor,” Christie’s head of communications, Toby Usnik, told us over the phone today.

Still, Artnet posted rumblings of the move on Twitter as early as May 4 and at least four unconnected sources have said Mr. Good’s placement at Christie’s private sales is a sure bet.

“This shows that Christie’s is ambitious about private sales,” said one collector familiar with Mr. Good’s new position. “It will bring in a large number of relationships.”

Before joining Gagosian, Mr. Good had his own gallery, which closed in the early 1990s after the market crash. At Gagosian, he worked with a number of artists and estates, including the estate of sculptor David Smith. He was instrumental in bringing the estate of Alberto Giacometti to the gallery. 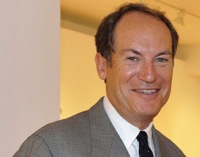