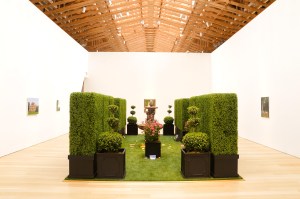 I’ve always favored  macho art, art that packs a solid dose of testosterone. My art collecting alter ego, whom I’ve dubbed Duc Jean des Esseintes, and who has curated the inaugural exhibition at my new gallery, Venus Over Manhattan, also preferred big, bold statements—large outdoor sculptures, super-sized paintings, almost anything oversized and impractical. Des Esseintes’s exhibition, called “À Rebours,” is named for and based on a 19th-century novel that describes Des Esseintes’s strange life of art collecting and indulgence, as well as his obsessions with poetry, absinthe and decadence. In his/my show, artworks by French 19th-century symbolist masters are intermingled with those of contemporary artists young and old, in ways both tasteful and tasteless.

Neither Jean nor I ever liked girly art, those petite paintings in fancy frames and fussy works on paper, so it’s no wonder that the work of Karen Kilimnik was never very interesting to us. All I could see in it were frilly pictures of castles and bunnies, and a silly and bad portrait of Paris Hilton dressed as Cinderella. Why, I asked myself, would any painter make work that is willfully wan and whimsical, and that comes across as badly painted, even feeble? The work looked to me almost as though it were designed for failure.

Then, in the summer of 2005, I had a Kilimnik epiphany in the Bevilacqua la Masa Foundation, a palace in Venice that serves as an art venue during the Biennale. Ms. Kilimnik had been invited to take over the entire building with an installation, and the magic she created inside that beautiful but decrepit old palace changed my understanding of her work. I remember walking in and hearing the sound of birds chirping and espying, in the corners, little nests with plastic eggs and fake fuzzy bunnies. She’d strung the chandeliers with pastel colored ribbons, and made paintings of handsome princes and princesses arrayed in 18th-century splendor, surrounded by horses and gardens, castles and lavish interiors, all in the style of some bad painter who worked in a 19th-century mode and mixed present-day celebrities with ancien régime fairy tale whimsy. Ms. Kilimnik’s mad visions cast Leonardo DiCaprio as a prince, Kate Moss as a Park Avenue princess; she brought in Emma Peel, Scarlet Johansen, Nureyev. Hers was a fully kitsch-ified,  candy coated world that looked saccharine at first, but that revealed itself, on closer inspection, to be dark and disturbing.

In fact, Ms. Kilimnik is not a traditional painter at all, she is an installation artist, much like her contemporary, the revered and cultish Cady Noland. This has caused much confusion in parts of the art world, especially when we consider a much younger painter, Elizabeth Peyton, whose masterful portraits of celebrities and art world characters have often been compared to the historical or celebrity-derived works of Ms. Kilimnik. In this comparison Ms. Kilimnik invariably loses because she can’t compete with the masterful brightness and ice cream smoothness of Ms. Peyton’s canvases. But dig a little past the surface and you’ll find this comparison is myopic and non-sensical. Ms. Kilimnik’s paintings must be seen as part of her installations. They are images from an imagination that never reached puberty, and they are not competing with the classic portraiture by the likes of Ms. Peyton, even if, occasionally, their subject matter overlaps.

And so the brand new Kilimnik exhibition at the Brant Foundation in Greenwich Connecticut is a welcome and timely one because it convincingly presents the full range of her oeuvre.  Seeing a single painting reproduced in an auction catalog or hanging in an art fair has never done justice to her work, and almost all the gallery shows I have seen are chock full of sellable paintings but lack the chandeliers, the music and empty perfume bottles that are needed to complete her storytelling.

Mr. Brant’s support and patronage are significant in this regard. He is a seasoned collector who as a young man in the 1960s bought paintings from Andy Warhol and learned about connoisseurship from Bruno Bischofberger, the fabled Zurich-based dealer/investor/collector. A man of many talents, Mr Brant excels at squash and tennis, but in sports he is best known for his polo team White Birch Farm, which dominated US polo for over a decade (I did, however, manage to beat him a couple of times). The patrons of this show are a powerful businessman/art collector and his iconic supermodel wife (Stephanie Seymour); the setting is a beautiful old stone barn abutting polo grounds that have hosted the world’s best and most famous players—there is, in other words, arguably no better fantasy context in which to see Ms. Kilimnik’s work.

The show, which encompasses the entire Brant Foundation, includes an indoor garden as well as chandeliers, birds, landscapes paintings, the requisite portraits and several installations. It’s the first time since Venice that I’ve seen the full spectrum of Kilimnik’s creative output in one place. As such, it is a wonderful testament to her singular dream—or neurosis, depending on how you choose to read it. I came to love the work when I stopped focusing on the pictures and started thinking about the ideas. We are all to some extent locked in our childhood fantasies, whether fond memories of youth or the prison of those painful teenage years, and the effects of formative experiences stay with us, through nostalgia, or longing and melancholy. There is sadness in Ms. Kilimnik’s work, but I also see the childish joys and excitements of adolescent fantasy, even if it is filtered through the mind of a 56-year-old woman.

In my eyes Ms. Kilimnik’s oeuvre is a world unto itself, a strange, kitschy parenthetical expression in contemporary art. I don’t bother comparing her to her art star peers. For most of us, our private fantasies exist in the further reaches of our consciousness. Karen Kilimnik’s are right on the surface: like Peter Pan, she never grew up, and she never will.  This show is a tour de force, so “Brava” to you, Ms. Kilimnik, I hope lots of people make the effort to get up to Greenwich to see just how good it all looks.

Correction: May 16, 2012: An earlier version of this article stated incorrectly that Karen Kilimnik suffers from Tourette syndrome.