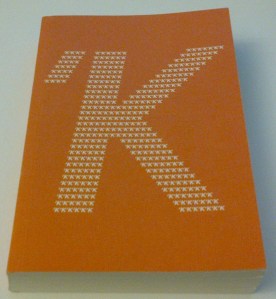 It’s been a full three years since Swedish artist-poet Karl Holmqvist last presented work in New York, but the drought is finally over.

At the Museum of Modern Art, Mr. Holmqvist has lined the walls of a gallery in Laura Hoptman’s “Ecstatic Alphabets/Heaps of Language” with papers bearing his inimitable texts, long stretches of oddly ordered repetitions of language—carefully conceived poetry, pure sound, the ramblings of a madman—laid out in crisp black capital letters. Occasionally they transform into calligrams—piping hot coffee cups, for instance, with steam rising as snakelike streams of letters.

But we’re here to discuss books. A recommendation: while visiting AZPC, pick up a copy of the artist’s latest book, ‘K. Published on the occasion of his recent shows at Kunsthalle Zurich and Bergen Kunsthall (and distributed by JRP|Ringier), it contains more than 300 pages of unfiltered Holmqvist pleasure, a bargain at $22.

Flipping through it, you may find yourself reading along, energized (ecstatic, even), though never quite comfortable. You glide through sensible sections, replete with references to art and popular culture—“I DRINK MY LITTLE DRINK / INSTITUTIONAL CRITIQUE / UNDERNEATH THE ARCHES”—but then rougher patches arrive: at signs (@) arrayed to look like giant at signs and tributes (of a sort) to artists like AIDS-3D and Genesis Breyer P-Orridge, their names piling up in long columns, page after page.

The artist-critic Ronald Jones suggested of another Holmqvist book that it is “best read occasionally and by chance, opening it at random,” which sounds like sage advice with ‘K as well. There’s a lot here: it’s not light reading. However occasionally incomprehensible, the texts always seem to buzz with thought, and it gets particularly good when bits of feeling slip through the wordplay and text games, as when he writes, “IF YOU CAN’T BE CRAZY / AS AN ARTIST / THEN WHAT?” Coming from many artists, that would sound grossly nihilistic. From someone like Mr. Holmqvist, though, an artist who has carefully, patiently honed his skills in a single, austere medium for years, it’s clearly a generative mantra.