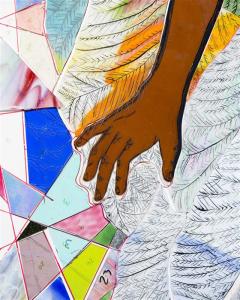 A preview of the work from the press release. (Courtesy James Ewing/Art Production Fund)

Kiki Smith will be the third artist to be featured in the Public Art Fund’s “Last Lot” series, which brings art to a deserted lot in Times Square at 8th Avenue and West 46th Street, the project’s organizers announced today.

Ms. Smith will place a series of stained glass stars statues in the lot that range from “18 inches to six feet in height and are a kaleidoscope of hand-blown, translucent, iridized, modeled, and cathedral glass,” according to a press release.

The rainbow-colored star clusters pay tribute to Josephine Baker, the American-born French burlesque dancer, singer and actress, who epitomized the sensuality and spectacle of the burlesque follies of the 1920’s. The first African American female to star in a major motion picture, and the quintessential entertainer of that time, Baker is also known for her support of the Civil Rights Movement and for her family of adopted children from all over the world, whom she called “The Rainbow Tribe.” Baker served as a muse to several influential artists based in Paris at the time such as F. Scott Fitzgerald and Pablo Picasso. Smith, whose work often explores feminist themes through depictions of the female body and women from history and mythology, is drawn to the complexity of Baker’s career as an erotic and primitivist performer/showgirl, and a social and political activist.

The last project in the group, by Josephine Meckseper, placed a series of fake oil derricks on the lot that “drilled” the Great White Way during daylight hours.