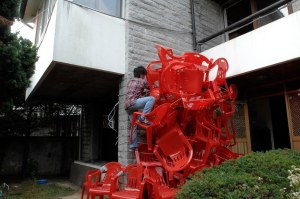 The names just keep coming! The latest country to put forward its representative for the 2013 Venice Biennale is Japan, which announced that the high honor will go to Koki Tanaka. Mike Kuraya, the chief curator of the department of fine arts at Tokyo’s National Museum of Modern Art will handle curatorial duties. Artforum has the story, which reports: “Kuraya states that he plans to use the pavilion as a platform for sharing experiences surrounding disaster, noting that any message coming from Japan will necessarily be in the context of the 2011 earthquake.”

Though Mr. Takanka, who was born in 1975, has been quite active in his home country, he’s rarely shown in New York. In 2004, he was in artist in residence at Soho nonprofit Location One.

The 2013 biennale is almost exactly one year away. The affair kicks off in June of 2013.