In Phaidon’s latest hulking art tome, Defining Contemporary Art, Bice Curiger, the curator of the 2011 Venice Biennale, recalls seeing Jeff Koons’s Puppy sculpture for the first time, in Arolsen, Germany, where it was installed during the run of Documenta 9, in 1992. (That show’s curator had famously made a point of not inviting the decadent American.)

“In Arolsen it was remarkable to witness a work of art attracting such a disparate audience,” Ms. Curiger writes. “[A]rt-world sophisticates were rubbing shoulders with rural German farmers and townsfolk alike, all of whom stood in awe beneath the towering sculpture.” The artist, she notes, called the work “a dialogue about humankind and God.” He wanted it to be a “contemporary Sacred Heart of Jesus.”

For about the past decade, Puppy, which stands 40 feet tall and is built of around 70,000 flowers, has sat in a field at White Birch Farm, collector Peter Brant’s estate in Greenwich, Conn. At Mr. Brant’s celebration for Karen Kilimnik at his Brant Art Foundation Study Center—more on that later—it once again earned long, admiring stares. The fence that surrounds the field was cracked open and many slipped through as the valet employees fetched their cars to give the piece a closer look.

New Yorker critic Peter Schjeldahl has called the work “the most richly and subtly painterly sculpture ever made,” and even up close it retains the magic of any truly great painting—its constituent parts can in no way account for the sheer visual punch it radiates from every inch.

A short, wide door was open on the back of Puppy, and a few people ducked down to sneak inside, where an impressive networks of pipes and pumps keeps the work perpetually hydrated. (It’s said that Mr. Brant spends more than $75,000 a yearto keep the work in top condition.) I popped my head inside but then immediately regretted it, realizing that I preferred to be left with some of the ecstatically strange sculpture’s inherent mystery. 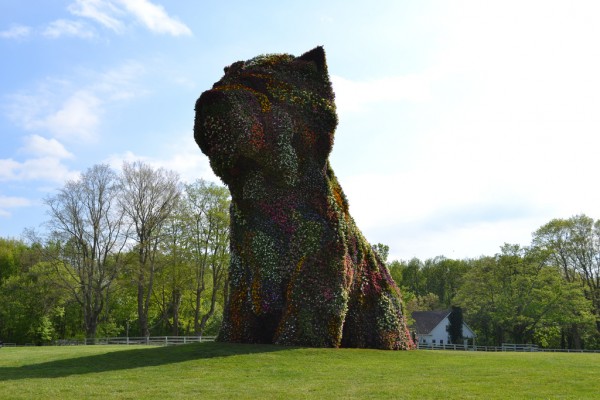