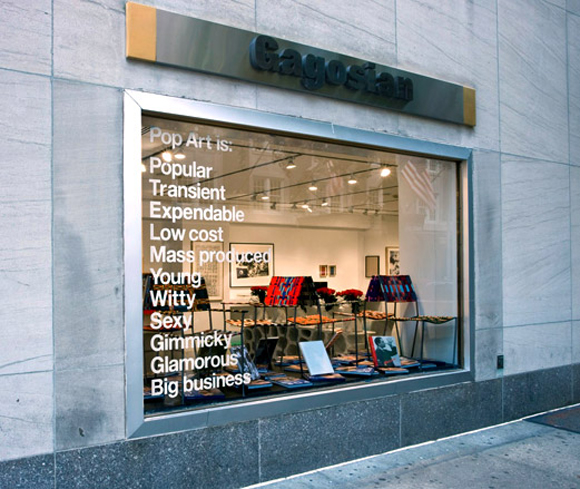 Gagosian, coming to a cafe near you. (Wet Jet)

For decades, Larry Gagosian has been a fixture at Sant Ambroeus, the Upper East Side cafe around the corner from his flagship gallery 980 Madison Avenue, which he opened in the late 1980’s. He even has a regular table, where he can watch the rest of the art world stream by, many stopping to pay their respects before taking their own seat inside the eatery that has long been the art world’s living room.

But soon Mr. Gagosian will be sipping his espresso closer to home—and it will be curious to see how many of his fellow connoisseurs will follow him.

As Gallerist reported in February, Mr. Gagosian plans to open a cafe in one of the storefronts at 980 Madison, and work is now underway on the project, which will include space for a gallery. In April, permits were filed with the Department of Buildings for demolition, plumbing and renovation work to the storefront previously occupied by the Spot Shop, where tchotchkes connected with the Damien Hirst show (books, prints, cufflinks) had been on sale.

Last week, the construction permits were approved by the city, and they reveal that the new cafe will be designed by Annabelle Selldorf. Additional city records filed with the Landmarks Preservation Commission provide definitive proof that Gagosian Gallery is opening a cafe in the multi-story storefront, along with additional gallery space.

Ms. Selldorf is a frequent collaborator with Mr. Gagosian (as well as with other gallerists for that matter, like David Zwirner), having designed layouts for various Gagosian Gallery shows, everything from the Picasso show in London to Monet and Francesco Vezzoli shows in New York. The latter was widely panned but for the exception of Ms. Selldorf’s installation work, which won plaudits for the convincing darkened chapel she created within the gallery to showcase Mr. Vezzoli’s kitschy paintings of weeping models.

Ms. Selldorf’s office declined to discuss the project, or even whom its client for the space was, citing confidentiality agreements.

Records reveal Mr. Gagosian is creating the cafe with help from Steven Kamali, the 30-year-old hospitality impresario who has worked on projects for the likes of Jeffrey Chodorow, Giuseppe Cipriani and Stephen Starr, as well as helping to open Colors, the failed restaurant created by the Windows on the World staff. Mr. Kamali is a partner in three East End hotels, Surf Lodge, Capri and Ruschmeyer’s, for which has been widely credited with Manhattanizing the Hamptons.

Mr. Kamali’s name appears as a restaurant consultant on an application filed with the city’s Landmark’s Preservation Commission. Any alterations to the exterior of the space have to be approved by the Commission—980 Madison lies within the Upper East Side Historic District. Ms. Selldorf’s plans call for alterations to the door and the storefront windows, according to architecture drawings on file, changes that would have to be approved by the commissioners.

The only signage on the storefront, according to the drawings, is a monolithic GAGOSIAN. No CAFE GAGOSIAN or, to Gallerist’s great disappointment, CHEZ LARRY.

While the building permits do not mention Gagosian Gallery by name—they are filed by RFR Realty, the landlord of 980 Madison that is controlled by fellow art world big shot Aby Rosen—the documents on record with the Landmarks Preservation Commission do.

A spokeswoman for Gagosian, which runs 11 galleries around the world, was unavailable to comment when reached by Gallerist. Mr. Kamali was also unavailable for comment.

The tri-level space, which includes the ground floor, a mezzanine and the basement, will also include room for a gallery, according to DOB records, but it was not clear what would go on where at this point. Still, what better way to enjoy that Richard Prince Nurse or a Cy Twombly sketch than with a warm cappuccino in hand?

And the shopping may not be gone, either, as zoning would allow for a retail kiosk in the space as well, familiar territory for Mr. Gagosian, who used to run a shop on the corner of the building. He vacated that space so that he might move into his current one, which may not have the prime frontage in the building but is bigger, pricier, grander and perhaps a little more discreet. Just like Mr. Gagosian.