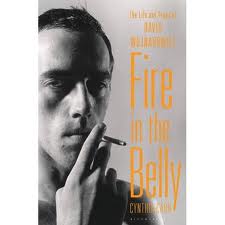 We call your attention today to Luc Sante’s review of Cynthia Carr’s 624-page biography of David Wojnarowicz, Fire in the Belly, in the summer issue of Bookforum.

The article hasn’t been posted online yet, but here’s some of what Mr. Sante has to say:

[T]here is every reason to think he would have been one of the relative few to have graduated from the hit-or-miss East Village art scene of the 1980s and gone on to greater glory. His stencils, icons, symmetry, hot colors, homoerotic imagery, and street art all remain visible in the work of others now. His ghost is just about discernible around the edges of stuff by Gilbert & George, Banksy, Shephard Fairey, Barry McGee, and I’m sure you can think of more.

Wojnarowicz, who died in 1992 from complications with AIDS, recently sparked controversy among certain right-wing Christians with his video A Fire in My Belly, which was included in the “Hide/Seek” exhibition that traveled to the Brooklyn Museum in 2011. In particular, the work’s image of fire ants crawling on a crucifix was met with no small amount of scorn (see this ridiculous tirade in the New York Post). That video was unfortunately censored from the “Hide/Seek” exhibition when it opened at the National Portrait Gallery in Washington, D.C., in 2010.

Mr. Sante, the author of Low Life, an excellent history of the Lower East Side, says Ms. Carr’s book is “umimprovable as a biography–thorough, measured, beautifully written, loving but not uncritical.”

Fire in the Belly is available from Bloomsbury on July 17. Bookforum is on newsstands now.