The biggest complaint about the newest season of Mad Men is that it’s not interesting to people who haven’t seen the entire series. Actually, the biggest complaint is probably Megan…not that she’s terrible or anything, but Don Draper has definitely taken a backseat this year to his wife’s story lines about wanting to be an actress, being very French, and singing “Zou Bisou Bisou.” (The real sign that the times are a-changing? New York Magazine running with a cover of Jessica Pare to promote the show.)

But we can see how Mad Men‘s fifth season–which is very good–is a little inaccessible to first-time viewers. We’re surprised that no one has made a parody of the Mad Men promos this year, because they are essentially designed to contain no information about the upcoming episode, and make the show look very, very boring.

What have we learned from these cryptic, mundane previews? (Besides Mad Men winning the Emmy for Best Drama four years in a row?) We’ve compiled the most interesting bits from each commercial to create an overview of this season of people working at an advertising office where apparently not a lot happens to try to figure it out:

Don: I have to tell you something.
Shot of Roger getting up from his recliner.
Shot of Don putting down a phone.
Bert Cooper: Everyone has somewhere to go today!
Joan: Do you want to close the door?
Peggy: Gosh!
Roger: Are you kidding me?
Pete: I don’t know anything. 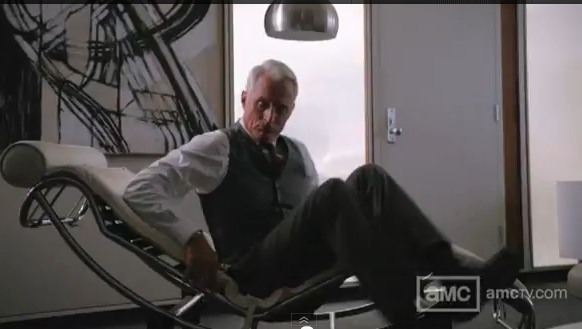