Earlier this week, on the night of the Met Ball, the Marc Jacobs boutique in SoHo was hit by French graffiti artist Kidult, who has famously vandalized Supreme, Hermes, and Louis Vuitton, among others. The hit? Kidult took a fire extinguisher filled with pink paint, and sprayed the word ART over the front of the store (seen above).

As a crew cleaned it up the next morning and Kidult took to Twitter to brag, Marc Jacobs and his canny reps turned the stunt on its head, capitalizing on the graffiti artist’s own work to the benefit of their own marketing: By Tweeting it out as “Art by Art Jacobs” and Instagramming an ‘artsy’ picture of it. Kidult, clearly on the scene, tried to make his presence known, but it was too late: Jacobs had won that one.

By the social media tape, onlookers were amused.

A few graffiti purists were definitely pissed at the scene of a fashion label managing to turn ostensibly subversive and damaging art on its head. Some simply didn’t understand the entire thing (like this stuffy French guy):

To which Marc Jacobs made it clear that, yes, he knew exactly what he was doing. Artistic intent, indeed:

But a social media coup simply wasn’t enough. Rather than end this thing in a stalemate, Marc Jacobs and his team have taken this thing one step further, making very clear his subversion of the supposed subverter. How?

He made a T-Shirt of the entire episode.

The T-Shirt is simply the picture that appeared on Twitter, with the same caption, on a pink shirt. Even better? According to the Marc Jacobs Twitter, “Available now for $689. Signed by the artist, $680.” And according to The Cut, yes, they’re actually selling it.

Jacobs, in this situation, has made one hell of a commentary about the absurd commoditization that some street art has yielded, and how easily ostensibly subversive art can actually be subverted, facile as it so often is, and it may be the best take on the matter since Exit Through The Gift Shop. 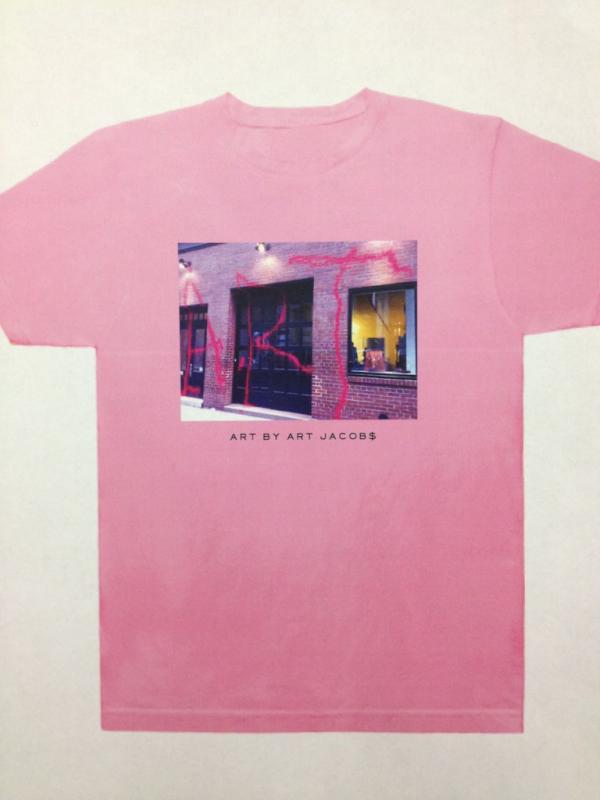