Last night, the Marc Jacobs store in SoHo at Mercer below Houston was hit with a blast of graffiti by a graffiti artist apparently notorious for hitting fashion labels. This morning, after it was cleaned up, Marc Jacobs’ PR machine appropriated it for their own branding. Smart.

The perpetrator was a French graf artist named Kidult, who apparently has a long lineage of blasting fashion labels with his stuff: 12 Oz. Prophet explains that Kidult has previously hit stores of Christian Louboutin, Hermes, and Louis Vuitton, among others (including, extensively, Supreme’s new Kate Moss-centered ad campaign). His style? Taking a fire extinguisher, filling it with paint, and blasting a storefront.

So, this morning, when Marc Jacobs employees showed up, they started cleaning up the work.

Kidult dropped by to snap a picture of them doing it, and posted it with the message “I did some ART?”

This, of course, was after Marc Jacobs International had already taken the time to Tweet it out as “Art by Art Jacobs” with the above photo.

And then, to rub it in, took an “artsy” Instagram photo, noting it as “Art Jacobs @ Marc Jacobs Collection.” Kidult, exactly ten minutes later, and not wanting to be shown up, took his own photo of the exact same part of the wall, without Instagramming it.

One can’t rule out the scenario that Marc Jacobs collaborated with Kidult to “vandalize” his store. That said, one also can’t rule out the idea that Marc Jacobs and the people who run his operation are far too canny to not capitalize on an opportunity to capitalize on some so-called vandalism, by appropriating it for their own marketing purposes, something some of the other brands Kidult has attacked might not be savvy enough to do.

Lesson learned, graffiti artists! Pick your targets wisely, if anything, for those who will override any ostensibly subversive efforts on your part by alchemizing them into part of their brilliant and profitable marketing machine. 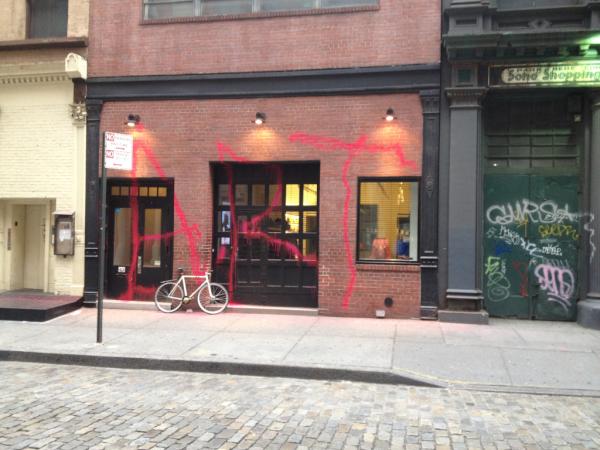