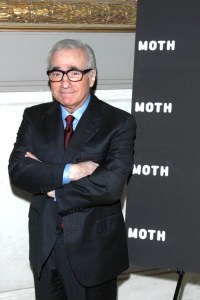 “A funny thing happened on the way down here,” said Martin Scorsese at the Moth Ball last night. He was telling the crowd about his car ride over to the event, at the event space Capitale, as he drove through the Lower East Side, where he spent his childhood. “Look it’s the Old Bowery Savings Bank,” he said he told his wife Helen. “That’s where my father had to go. Jimmy the cop would take him on Friday to make sure nobody stole his money.” Mr. Scorsese then reminisced about a field trip led by nuns from his parochial school in 1951 where the kids were allowed to touch $1,000 bills. When Mr. Scorsese rolled up to the event, he looked at Capitale and said, “This is it!”

Looking up at the coffered ceilings of Capitale, you could still see the engraving “Bowery Savings Bank.” It was an oddly apropos story at “The Moth Ball: A Night at Storyville,” an annual event celebrating the Moth, an organization that keeps the oral tradition alive through live storytelling events. Tables flickered in candlelight and guests donned jeweled hair-pieces and red feathered boas as if they were on a New Orleans jaunt, in line with the night’s theme, sitting before lavishly decked tables and a three-course dinner.

Mr. Scorsese capped an evening that brought together regular folks and celebrities, as the Moth is known to do, to tell their most shocking, tear-jerking and heartwarming tales. And last night was no different.

Eleven winners of the Moth’s “Storyslams” series—amateur nights for storytellers—each had to give a one-minute bite-size version of their winning story. Exceedingly memorable was one man’s tale of a time hitchhiking on the South Side of Chicago that went terribly wrong. “If you let me play with your dick,” said the driver who picked him up, “I’ll drive you anywhere you want.” Our storyteller created a tantrum when he saw the guy’s pistol peaking out from a rag and, it turns out, escaped the car of John Wayne Gacy, the serial killer and rapist who was executed in 1994.

After dinner, we spotted the comedian Rachel Dratch by the silent auction, hovering around the tables looking at the prizes.

“Are you bidding on anything?” we asked Ms. Dratch, a very petite woman in an elegant black dress with a floral fringe.

“The dinner with the string theorist,” she said referring to the prize Discuss String Theory with New York Times best-selling author Brian Greene over Lunch at Hangawi. “It’s for my dad.” Then a friend interrupted us and gave Ms. Dratch a hug.

“Someone keeps outbidding me on the string theory dinner,” exclaimed a tall young entrepreneur named Luke, half hour later, to The Observer. He was looking at the iPad that listed the bids on the silent auction prizes.

“It’s Rachel Dratch,” we told him. He looked back intently at the iPad as if trying to decide.

“I don’t want to go over $500,” he said. “Because if I win and the string theorist doesn’t say something that changes my life, I’m going to be mad.”

Kyp Malone, one of the band members of TV on the Radio, was also in the silent auction section looking at some items on a computer screen. He was distinctive with his beard and a dark hat.

We asked him what his story was. He shook his head. “It’s too involved,” he said.

Filed Under: The Moth