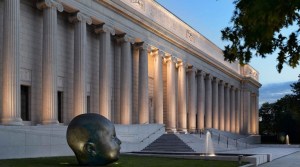 The Museum of Fine Arts in Boston announced over the weekend an enormous gift of 6,000 photographs, 100 works on paper and 25 paintings from the collection of Saundra Lane and her late husband, William. The donation includes 2,500 photographs by Charles Sheeler, another 2,500 by Edward Weston, 500 photographs by Ansel Adams and paintings by artists like Hyman Boom and Franz Kline. The museum told the Boston Globe that the value runs into the “nine figures.”

The MFA formerly had a collection of 9,000 photographs. The Lanes also donated 90 American modernist paintings and works on paper more than two decades ago and have three galleries named after them in the museum’s American wing.