This morning, Mitt Romney released a follow up to his “Day One” television commercial that encourages viewers to imagine the beginnings of a Romney presidency. Aptly titled, “Day One, Part Two,” the new ad lists more things Mr. Romney’s says he’d do in his first day on the job.

“What would a Romney Presidency be like?” a narrator asks at the beginning of the ad.

The narrator goes on to list several things Mr. Romney plans to do in the first 24 hours of his hypothetical administration.

“Day one, President Romney announces deficit reductions, ending the Obama era of big government, helping secure our kids’ futures. President Romney stands up to China on trade and demands they play by the rules. President Romney begins repealing job-killing regulations that are costing the economy billions,” the narrator says. “That’s what a Romney Presidency will be like.”

In his original “Day One” ad, Mr. Romney promised to approve the Keystone pipeline, to introduce tax cuts and to replace “Obamacare” with “commonsense health care reform” in his first day on the job. Mr. Romney might not want to release a “Day One, Part Three.” He’s already got a pretty busy day planned. 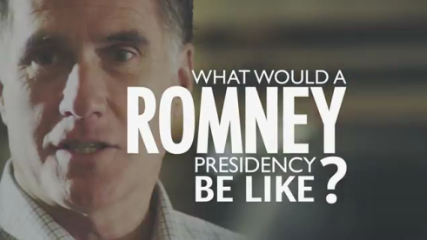