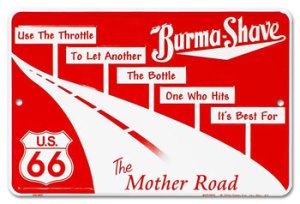 The Museum for African Art, which was scheduled to open later this year at a new home at the northeast corner of Central Park—One Museum Mile, they’re calling it—has delayed its unveiling, citing the need to raise around $10 million to complete the project. [NYT]

Here’s a short video about James Brett’s Museum of Everything. [Guardian]

Here’s an interview with Scott Pask, the gentleman behind the “Monet’s Garden” show at the New York Botanical Gardens, which opens Saturday. [WSJ]

Knoedler and its former president, Ann Freedman, are seeking the dismissal of a $17-million lawsuit that alleges the gallery sold a fake Jackson Pollock. [NYT]

J.J. Sedelmaier takes a look at Burma-Shave’s legendary roadside advertising campaign, which ran from 1927 to 1963. [Salon]

Meanwhile, an account that appears to belong to Raymond Pettibon has been tweeting wildly about Burma-Shave. Sort of. [@RaymondPettibon]