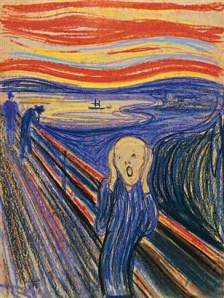 Tonight at Sotheby’s, about an hour into the house’s enormous Impressionist and modern evening sale, a tuxedo-clad Tobias Meyer brought his hammer down on Edvard Munch’s The Scream (1895), selling it for $119.9 million with buyer’s premium to a telephone bidder. That makes it the most expensive work ever sold at auction, a fact that Mr. Meyer announced to an applauding crowd.

Applause first rippled through the room when the bidding eclipsed the $100-million mark. Steady bidding had paused for a moment at $99 million, when a phone representative indicated a bit more time was needed. “At 99 million, I have all the time in the world,” Mr. Meyer replied, not missing a beat. No art auctioneer before Mr. Meyer had ever before crossed that line into nine figures.

The battle for the lot lasted some 10 minutes, climbing in million-dollar increments for the last $15 million of the $107-million hammer price. When Mr. Meyer ventured above $90 million, people started doing the math, murmuring. With premium added, would it beat the Picasso portrait that sold for $106.5 million at Christie’s in 2010? In the end, the hammer price alone would eclipse that number.