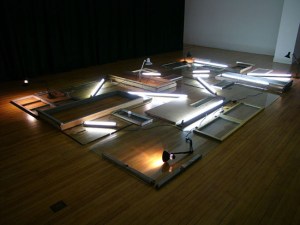 Bill Culbert, who’s known for sculptures that incorporate light, will represent New Zealand at the 2013 Venice Biennale, Artforum reports. The island nation, which has participated in the event since 2001, will use the Istituto Santa Maria della Pietà as its exhibition space.

The e-flux announcement for the appointment says that Mr. Culbert was born in 1935 and describes him as “a maker of elegant, poetic, and often dazzling sculptural installations that harness the qualities of electric light and make striking use of found materials.”

Artforum quotes New Zealand Arts Council Chair Alastair Carruthers saying that the large pavilion will allow “Bill to respond to and create a journey through some very different spaces, and extending New Zealand’s presence to the busy edge of the Grand Canal.”

Like many of the international artists that are sent to the Venice pavilions each year, Mr. Culbert has exhibited in New York only rarely, though he was included in the group show “Light Time and Three Dimensions” at the Pace Gallery—then called PaceWildenstein—back in 2007.