A severe cross-costal storm system (apparently of Los Angelino origin) bore down upon the Metropolitan Museum of Art this week. The tempest, however, was not unforeseen. Squalls have been detected all week, as Hollywood winds have breathed flash-bulbous air over the city. Finally, at prime cocktail hour Monday, the heavens burst. Instead of rain, legions of celebrities precipitously poured forth.  Beneath an ivory tent, reporters and photographers lined the Met’s red-carpeted steps. As if embarrassed by the necessary unpleasantness of media, the museum set up a imitation privet hedge bordering the stairs. Paparazzi (who were required to appear in black tie) leaned over the waist-high foliage like prying neighbors, frantically snapping their shots.

Separated by the width of the staircase into north and south factions, broader civil (and uncivil) fissures soon emerged amongst the body of reporters. On the north side, gussied representatives from glossies and dailies bickered for elbowroom. A late-coming society blogger was boxed out (with half-hearted contrition, ceremoniously expressed), while one reporter complained about quote stealing from the previous year’s fête. Things were quieter on the southern front, although the group was largely ignored by politicking PR representatives hoping for viral pick-up.

And then, before the squabbling was resolved, the floodgates opened. Anna Wintour and daughter Bee Shaffer were among the first to arrive, criss-crossing the red staircase for the cameramen. We took a moment to speak to Ms. Shaffer as her mother placated a clamoring cable news network. Wearing a blue-lace Erdem gown with a manageable train, Ms. Shaffer claimed to be worlds away from her typical attire. “I live in, like, denim shorts and plaid shirts. It’s awful! I live in L.A, no one dresses up there,” she informed us. Asked to identify her harshest fashion critic, Ms. Shaffer pointed behind her shoulder toward her fur-clad maman. “She’s fantastic,” Ms. Shaffer was quick to add.

Julie Macklowe, arm in arm with designer Chris Benz, was soon circulating amongst the reporters (both Northern and Southern) sharing the details of her newly pink coiffure. “I dyed it in my apartment last night, in my bathroom,” she shared excitedly. “Pink hair does fade, but it looks beautiful when it fades. It lasts for about a month. I sort of wish it would last forever.” Asked what she though of Vogue’s new initiative to hire healthy, of-age models, Ms Macklowe smiled. “I love that. We can all eat a little more, right?”

Unlike some of the harlequin smoky-eyed ladies trouping up the red carpet, Stephanie Winston Wolkoff appeared fresh-faced and organically stunning. Gathering the skirts of her strapless Vera Wang gown, she offered a slightly different perspective concerning the fashion Bible’s announced measures. “I think Vogue taking their stance on that issue is an incredible thing. I think that fundamentally our industry needs to support more of the, you now, muscular, shapely, beautiful women of the world.” she told The Observer. While she has fully emerged from beneath the wing of Vogue’s chieftess, Ms. Winston Wolkoff still regards her former boss as the highest fashion authority. “I respect Anna the most,” she said before waltzing inside.

Wendi Deng Murdoch agreed, also naming Ms. Wintour as her couture sage. “She dresses me sometimes! I always get advice from her,” Ms. Deng told us. Soon we were chatting with Ms. Deng about the Taiwanese designer responsible for her bejeweled drop earrings and the virtues of Prada ready-to-wear. “I love Prada because her dresses are so interesting and edgy,” she said. “I wear it for every day.”

While mostly serving as crutches for their gown-hobbled dates, some gentlemen also did their best to stand out. Robert Kraft showed us his diamond, football-shaped cufflinks. “The players gave that to me after our third Super Bowl win,” he bragged. Asked who he looks to for fashion inspiration, Mr. Kraft did not hesitate. “Tom Brady,” he replied.

The museum’s front stairs proved particularly difficult for many of the female guests, whose ambitious gowns stunted varsity struts, allowing no more than a totter. Renée Zellweger looked more like (a slender) Bridget Jones as she maladroitly attempted to ascend the daunting staircase in her black Pucci Gown. Despite the help of an aide, Ms. Zellwegger was only able to take half-steps, and essayed to mask her limited range of motion with repeated poses for photographers who were more interested in Florence Welch.

“Amy! Amy!” a young reporter desperately shouted as Amy Poehler passed. “I’m sorry! I can’t move!” the actress replied, tangled in the feathered train of her Fotini gown. At least two nameless guests tripped on overzealous hems, but like figure skaters, immediately resumed their routine, red-faced with the knowledge of a duly-docked score. Andre Leon Talley struggled toward the entrance, at one point grasping in vain at the leafy periphery. “I’m exhaaaauuuusted!” he proclaimed, finally finding the front door. He then spent several seconds pressing his face against the cool marble of the MET’s foyer, much to the envy, we imagine, of equally breathless belles unwilling to smudge their rouged cheeks.

And then there was Marc Jacobs. Wearing just white boxer shorts and a sheer-lace dress, we asked the designer about his outfit. “It’s just a black lace dress,” he said sounding bored. The irony was, apparently, unintentional. We asked Mr. Jacobs when he last donned a particularly unsightly ensemble to an event. “I don’t think there’s such a thing as a fashion faux pas. As long as you’re happy and you do you. I mean fashion’s about self-expression, and if you express yourself honestly,there is no faux pas.” After citing himself as his harshest fashion critic, the near-naked emperor sauntered up the stairs, irreverently at home. 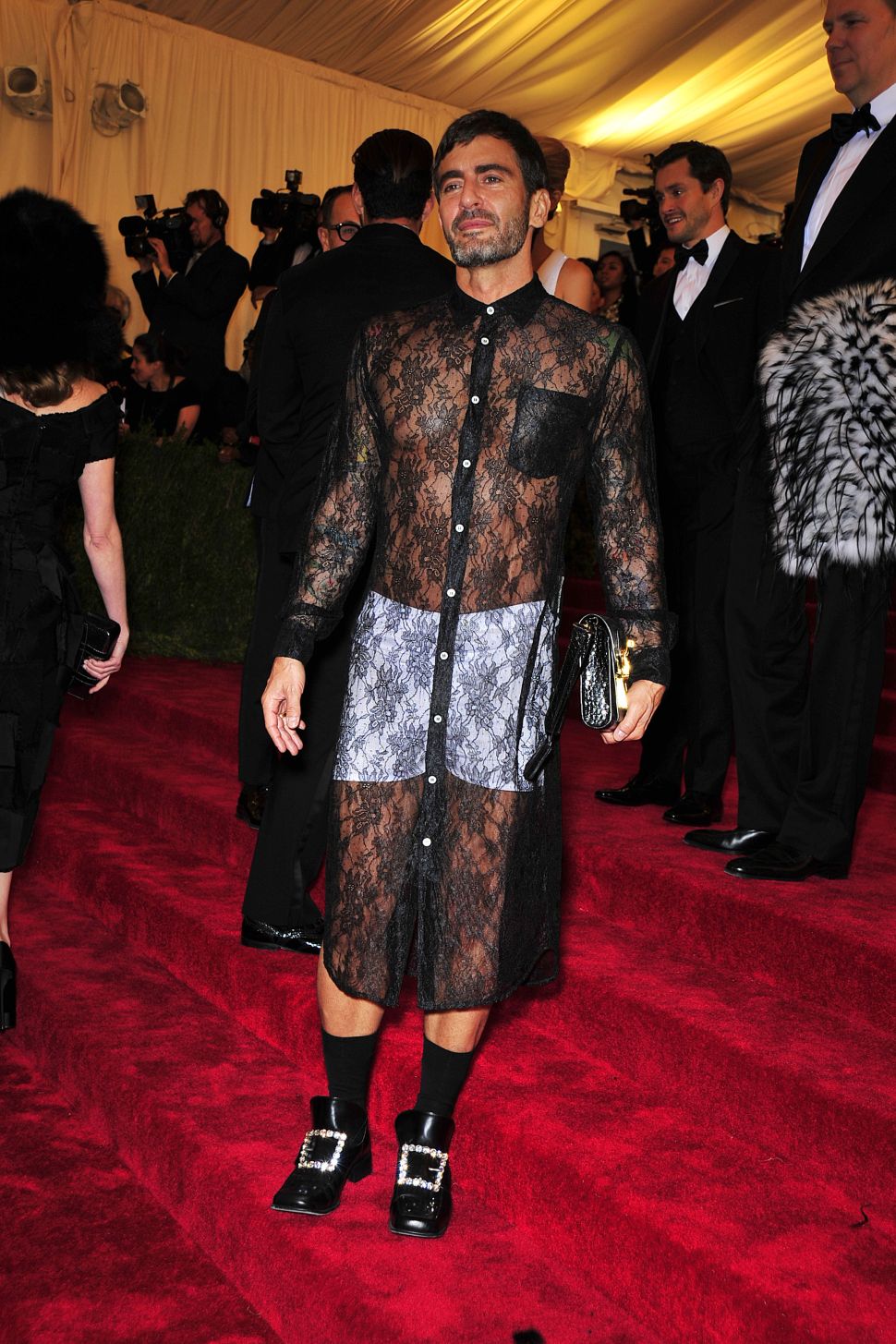