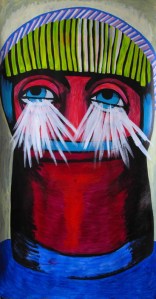 A work by Dumitru Gorzo. (Courtesy the artist and NJMoCA)

A little less than two years after it mounted its inaugural exhibition, in Asbury Park, N.J., the nomadic New Jersey Museum of Contemporary Art will present its second show in the Garden State. Up this time is a one-person exhibition of the work of Romanian artist Dumitru Gorzo, curated by Marek Bartelik, the president of the International Association of Art Critics, which will be installed throughout Red Bank, N.J. The show runs Aug. 19 through Oct. 14.

Titled “Heads,” the show will include more than 50 paintings by Mr. Gorzo that are informed by “caricatures about New Jersey’s image advanced by reality shows and jokes,” according to NJMoCA’s news release. Said Robin Parness Lipson, one of the museum’s founders, in the release, “NJMoCA’s objective, exemplified by our world-class exhibition of Dumitru Gorzo presented in an unexpected outdoor context, intends to turn that mocking image of New Jersey on its, well, HEAD.”

NJMoCA debuted in Oct. 2010 with a large group show called “It’s All American,” which was organized by Haley Mellin and Alex Gartenfeld.