At the end of April, Vice magazine, the Williamsburg house organ, threw a party in the neighborhood. The party was inside 80 Wythe Street, a giant old factory building, a redbrick behemoth that was built in 1901 as a cooperage. Those bricks used to be covered in graffiti and wheat paste and other street art ephemera from some of the genre’s best practioners. On this occasion, they were gathered inside, to celebrate an installation around the corner by Faile, the local artistic duo known for their psychotropic collages, a mix of comic books, B-movie posters and indigenous art from Asia to Iroquois.

“When we were young artists just getting by, scraping together enough money for that next project, this was the place to be,” said Patrick Miller, one half of Faile. “Williamsburg was it.”

Nearby, two blonde cherubs, the children of Patrick McNeil, Mr. Miller’s artistic partner, spun themselves silly around three stylized Tibetan prayer wheels in the middle of the room. The elder child, a boy of about five wearing the skinniest of black jeans, kiddie Converse and a jean jacket with a giant Tiger patch on the back bigger than the boy’s head head, came to an abrupt stop in his dance. His sister, maybe three, in engineers overalls, a step behind, jumped just then into his arms, and they embraced in a hug. The whole jaded room was watching.

It was the cutest, coolest thing in all of Brooklyn.

A decade, even five years ago, it would have been impossible to imagine this scene. “Look at the lineage here, it’s somebody who cares a lot about making Brooklyn cool,” Mr. Miller said, gesturing around the space.

This was not some swanky, skanky loft party on the edgy edge of New York’s social periphery. This was the unofficial opening party for the Wythe Hotel, the kind of establishment that thinks of itself as above opening parties, above press, above hype, even as a line forms out the door. This is, the work of three Brooklyn tastemakers in their prime.

This was, is and will be the greatest thing Williamsburg has ever seen. It is the pinnacle, the acme, the end. The story of gentrification, at least in this oft-buzzed about corner of Brooklyn, is over—checked at the curved-glass-and-carefully-rusted-steel door outside the Wythe. If Francis Fukuyama needed a hotel room in Brooklyn, this would be it. Thank you, and good night.

Slideshow: Inside the Wythe Hotel >>

“I love this hotel,” Nick Greene said, never mind it was his first visit. “It’s nice there’s finally a hotel in Brooklyn. In my fantasy of my parents’ and my own coolness, they’ll stay here, and I’ll come to the parties here.”

“You can forget about the Ace, the Standard and the Dream,” Peter Shapiro, proprietor of the super-popular Brooklyn Bowl across the street (and a Chelsea resident), said, a smile on his face and dollar signs in his eyes. Or maybe it was just the free cocktails. 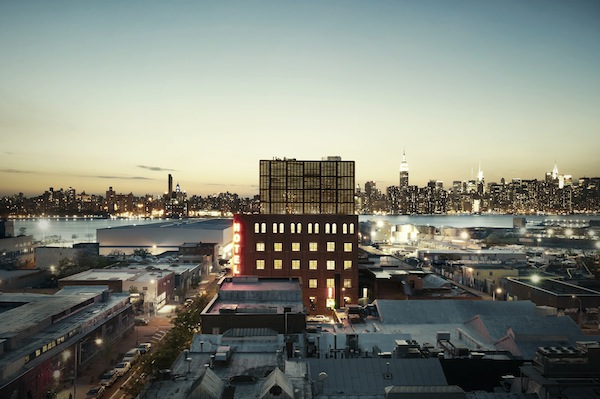